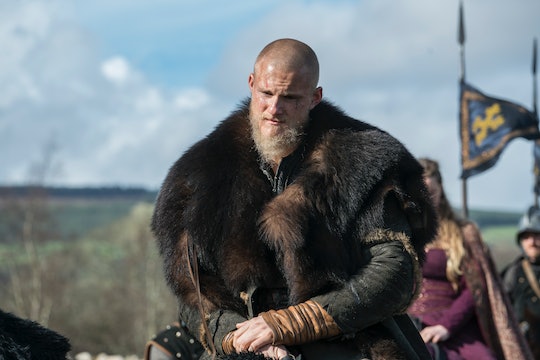 Bjorn Might Not Make It Out Of 'Vikings' Season 5 Alive

After years of Ivar fighting Bjorn for power in Kattegat which is currently under Ivar’s rule, it’s all come to this head-to-head battle in the Vikings Season 5 finale. Nobody necessarily has to die in order to end the fight, but it’s looking like that's the way it's going to go. I’m not concerned about Ivar because of the whole ruthless killer persona he has down to a T, but, Bjorn could die in the Vikings Season 5 finale and I don't think fans are ready to say goodbye.

Somehow, Ivar has come out of countless fights in the last four seasons with more wins than battle scars. It’s time for good to prevail on Vikings, but thing are looking pretty grim for Bjorn at the moment. In the trailer for the Season 5 finale, Ivar shouts to his men, "When I tell you to kill them, you kill them" shortly before it cuts to a scene of Bjorn laying on the ground, seemingly unarmed and hopeless. It could all be misdirection and Bjorn somehow makes it out of the battle alive to fight another day. Right now, however, it doesn't look like he’s going to make it out of this one without losing his life or losing someone close to him.

Alexander Ludwig, who plays Bjorn, told TV Junkies in November that as Vikings began to veer further off course from real historical events, he and other actors started to get nervous about their futures within the series. While I believe Bjorn is one of those more or less good characters meant to last until the end of the series, we’re headed into the final season and anything is possible.

"For me, if [Bjorn] goes, I want it to be memorable and for a good reason," Ludwig said. "I think Michael [Hirst, Vikings creator] obviously shares that same thought as me. Whether or not I go isn’t so much of a fear for me, but my biggest fear would be not doing the character and fans justice. However, I know that with Michael we are in the greatest hands so I’m not worried."

Ludwig also said that although Rollo asked Ivar to spare Bjorn’s life earlier in the season, Rollo is another family member who’s dead to him now. If Bjorn can't get away with killing his half-brother, maybe he can at least get some justice in killing the uncle they share. That is, if Bjorn makes it out of Season 5 in one piece.

The one person Bjorn has continued to have some semblance of allegiance to is Lagertha, who Ivar is still intent on killing someday. It wasn't too long ago that Ivar vowed to kill her after he took over Kattegat, so I don't see a truce sparking up between the two brothers if they both make it out of this battle alive.

Vikings was inspired by real life Norse mythology and actual historical findings helped shape the characters in the series, even if some storylines have been embellished for the sake of entertainment. Since the show is based on real Viking warriors, though, all of these people had to have died at some point. In real life, Bjorn Ironside is believed to have died of old age in Scandinavia rather than during battle. I know Vikings hasn't always stayed close to history throughout the seasons, but if the plan is to follow Bjorn’s life to the end, he might live through this showdown with Ivar.

Still, you can’t help but worry about him. Because if Bjorn dies, that means Ivar has won yet another battle. And if Ivar comes out of Season 5 victorious, that can only mean bad news for Season 6 of Vikings.