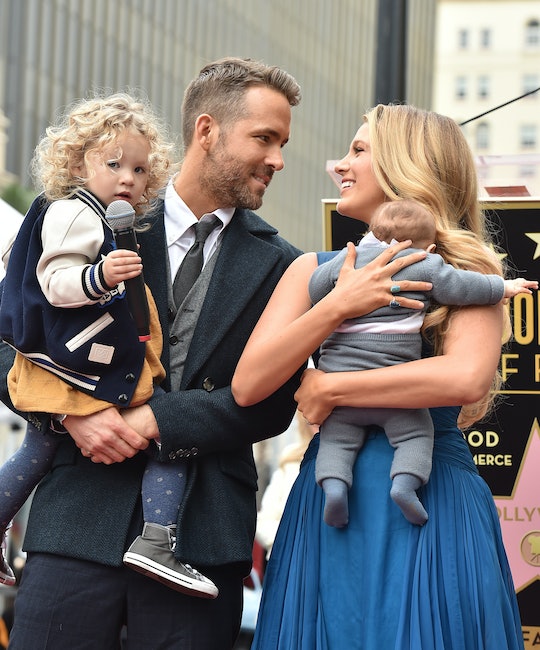 It's not easy to get in a workout with little kids around, but one inventive mom named Blake Lively recently shared that her daughters are pretty helpful in that department. How? She uses them as weights and how did I not think of this sooner?

Lively and her husband Ryan Reynolds are parents to three daughters: 5-year-old James; 3-year-old Inez; and a baby girl born in October, who apparently shall remain nameless for the time being. Or at least until her parents decide to share it.

In the meantime, though, Lively sat down for an interview with Vanity Fair for the magazine's YouTube channel and shared what a day on the set of her new movie The Rhythm Section looks like. And like most parents, her day starts long before she goes to work. At the unholy hour of 5 o'clock in the morning, but not just so she can get into prime physical condition to play a spy in the movie. As she explained to Vanity Fair, she gets up early "mostly so I can do mama duties with my girls. Have breakfast with them, hang out with them. Work out with them."

So what does working out with her small daughters look like? Well, she does want people to know that she's "not Dwayne 'The Rock' Johnson," and instead chooses to work out with her girls by "using them as weights."

"Instead of wearing a weight vest I wear my children," Lively said.

This is pretty genius when you consider two of her children are older. As Mommyish pointed out, including your kids in your workout routine helps them see that you prioritize yourself, being active is important, and extra bonus points? It might help them expend a little energy.

Although it seems this might not be the case for Lively. She admitted to Vanity Fair that her long day on set would end in time for her to come home and tuck her daughters into bed at 9 p.m. because "they don't ever go to sleep, honestly. We gotta invent something." Lively also shared that she often climbs into their playpen with them and falls asleep until her husband comes to wake her up.

Such are the sacrifices of motherhood, and it must be even the tiniest bit harder now because daughter Inez is apparently having a hard time adjusting to the new baby, as Lively told Jimmy Fallon on The Tonight Show in January. Maybe Inez is just worried the new baby will take her place as her mom's workout equipment.