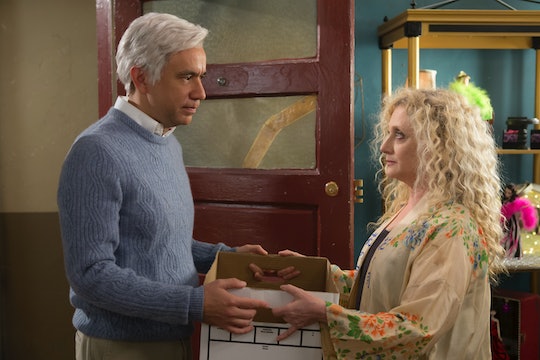 Warning: spoilers from Season 3 ahead! For those of you who watched HBO’s documentary The Jinx about Robert Durst — the New York real estate mogul who was accused of killing his first wife — seeing Fred Armisen’s Bobby Durst character during Season 2 of Unbreakable Kimmy Schmidt was pretty special. And Bobby Durst returned in Unbreakable Kimmy Schmidt Season 3 with the same weird inflection in his voice that the real-life man is known for and quirks that actually made him the oddly perfect boyfriend for Lillian.

But in the Season 3 premiere, Lillian finally broke things off with Bobby, citing the reputation he has being bad for her political campaign. Which, let’s face it, is a pretty legitimate reason. But viewers did get some more backstory on the couple who, according to Lillian, met as kids at summer camp. In the Season 3 premiere of Unbreakable Kimmy Schmidt, Lillian said she’d known Bobby since 1964 and that she’d been his first alibi, furthering the idea that the show absolutely based his character off the accused murderer who was faced with a felony weapons charge and ordered to serve an 85-month sentence.

In an interview with The Hollywood Reporter, showrunner Robert Carlock said that the idea to base Armisen’s Bobby Durst off the real guy was kind of a no-brainer. “We were all so obsessed with The Jinx when we started writing the season, and Durst is such a great New York character,” Carlock said. And for the small role he played in Season 3, he continued to be a great quirky character who weirdly fit in on Unbreakable Kimmy Schmidt.

When Lillian broke up with him for good, she made it a point to do it in a public place and even though she was clearly totally into his particular brand of weird up until then, she knew it was for the best. Toward the end of the episode, even Bobby said that he was holding her back and they should break up. Then, he urinated on himself, blew Lillian a kiss goodbye, and left. But somehow that’s not really a surprising exit for Bobby in Unbreakable Kimmy Schmidt.

In real life, Durst is in jail in Los Angeles awaiting the trial for the alleged murder of his friend, Susan Berman, but in Unbreakable Kimmy Schmidt, the caricature of the real-life man was kept relatively light. As of the Season 3 premiere, he’s gone, but he could always come back somewhere down the line.