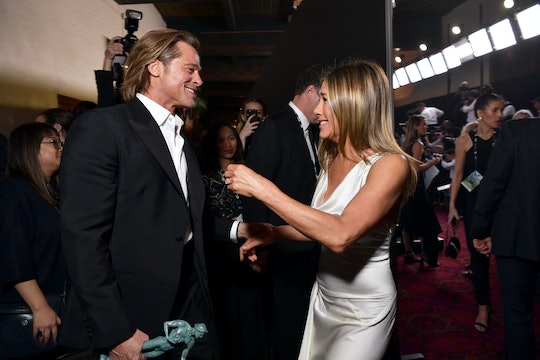 For a brief moment, 2020 looked a little bit like 2002 when the members of one of Hollywood's former power couples collided at the 26th Screen Actors Guild (SAG) Awards. Brad Pitt and Jennifer Aniston's SAG Awards reunion sent the Internet into overdrive as countless fans pined for the two stars to get back together after seeing how genuinely supportive they appeared to be of each other.

No doubt about it, Sunday was an exciting night for Pitt and Aniston — both actors picked up awards — and for us. It began with 56-year-old Pitt winning Best Supporting Actor for role as Cliff Booth in Quentin Tarantino's Once Upon a Time in Hollywood. During his acceptance speech, Pitt joked it had been hard to get into his role.

"Let's be honest, it was a difficult part," he said. "A guy who gets high, takes his shirt off and doesn't get on with his wife. It was a big stretch, big."

Cameras then cut to show Aniston, Pitt's ex-wife, laughing in the audience. The couple were married in 2000 and divorced in 2005, at which point Pitt began dating Angelina Jolie. Pitt and Jolie were married in 2014 and have six children together. They later filed for divorce in 2016, according to Insider.

After accepting his award for Best Supporting Actor, Pitt was caught lingering backstage to watch Aniston win Best Actress in a TV Drama for her role as Alex Levy in Apple TV+'s The Morning Show. Cameras then caught the former couple congratulating each other backstage with Pitt appearing to hold on to Aniston's wrist as she moved to depart, The Cut reported.

Photos of Pitt and Aniston's reunion at Sunday's SAG Awards left many fans on social media clamoring for the two actors to renew their relationship. "Brad gazing at Jen made my day, month and year," one user wrote on Twitter.

Even those well aware of the pair's post-split friendship found themselves unable to resist the fantasy their SAG reunion inspired. "Me: Brad and Jen are mature adults who can be friends without the world freaking out every time they're in the same room together ok?," another Twitter user wrote. "Me after seeing The Photo: do we call them Braniston or Anipitt?"

What's more, even fans who still recalled the more painful reported details of Pitt and Aniston's split found themselves drawn in by the pair's interaction. "So much of me does not want to support a Brad and Jen renaissance (the lies! the infidelity!)," a Twitter user wrote. "But... we unfortunately have to stan this #SAGAwards reunion."

But although the Internet may want to see this former power couple reunited for good, Aniston has already appeared to dismiss the idea. "It's hysterical," she told Entertainment Tonight when asked about the chatter her interactions with Pitt had generated. "But what else are they going to talk about?"