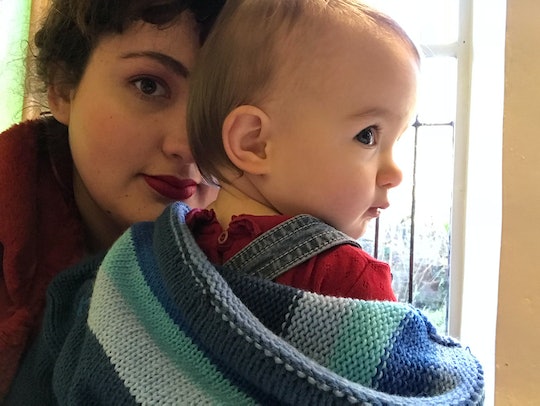 Let's Be Clear, Breastfeeding Is Way Harder When You’re An Introvert

As an introvert, being out among my species can often feel like a struggle. As an introvert who also breastfeeds, the last year of my life has been an especially vulnerable one. I exist primarily within my own head. There are what can sometimes seem like an infinite amount of situations that might lead me to feel anxious in public. Most often, I worry about how my words come across. Did that sound condescending? Silly? Unintelligent? Rude? If I'm not worrying about what I've just said, it's probably because I haven't found anything to say at all. At other moments, it is the space I occupy in my plus-size figure that concerns me. I know, logically, that I am entitled to that space. Knowing is not always enough to deflect the stares, the snickers, or the blatant insults, though.

Much like I know that fat people are entitled to occupy space, I also know that all mothers are entitled to breastfeed their infants and toddlers in public (unless you're in Idaho!). The controversy surrounding the latter feels wholly Victorian: A sign that we so deeply sexualize feminine figures that doing something as innate as providing for our children when they need to eat is perceived as scandalous, amoral, or dirty.

I have watched as outgoing friends and acquaintances whip out their boobs without hesitation — practicing the progressive, feminist ideals that they preach.

Even so, knowing is not always enough to deflect my fears. I have breastfed my 14-month-old in public many times since she was born, but shyness has coated almost all of those experiences. It's not the fear of judgement that has held me back so much as the discomfort that comes from putting oneself out there when you are so used to self-hibernation.

Though I have never experienced breastfeeding as an extrovert, I have watched as outgoing friends and acquaintances whip out their boobs without hesitation — practicing the progressive, feminist ideals that they preach. Every time, I have wished doing the same could come as easily to me. I hold the same ideals as them, after all. I know this is my right.

The moment a boob comes out, I feel as though I am letting people into my life in a way that is foreign to me.

Through self-reflection, I've come to the conclusion that my reluctance to breastfeed in public primarily comes down to my tendency to hyper-analyze everything happening around me at all times — a classic trait inherent to most introverts. The moment a boob comes out, I feel as though I am letting people into my life in a way that is foreign to me. Like I am letting them into one the most personal moments of my day, without knowing the first thing about any of them. Like I am letting them become spectators to my relationship with my kid, with no clues as to whether they deserve such a role.

This might all sound strange coming from someone who spends so much time sharing personal information on the internet, but being open on the web is a far different experience to being open in the real world. A long time ago, I started writing because I struggled with speaking. I started engaging with people on social media because engaging with them in person was too frightening. As a result, I've grown to trust readers, acquaintances, and even perfect strangers online more than I might strangers on the street, or in a coffee shop, or on public transportation.

The thing is, I'm very cautious with who I let into my life. I'm very cautious when determining whether I should give someone access to my most vulnerable self. Some of my introversion might be inherent, but some of it is likely a result of being hurt: Of trusting when I shouldn't have trusted.

I'd love to be able to detach my appreciation for privacy from breastfeeding. I'd love to see it as the natural, evolutionary, most ordinary of practices that it is: A practice that can and should be shared freely because of how basic it actually is. I haven't succeeded fully, though. There is just something about breastfeeding that feels too personal for third party viewership. There is just something about doing it in public that feels akin to giving someone a key for the door that is my personal life, before I'm sure I really want to.

All that said, I fully intend to continue breastfeeding in public. My introversion might make me feel awkward and uncomfortable while doing so at times, but it's a small price to pay for the greater good. In this case, the greater good being the continued fight to de-sexualize women's bodies and create safer spaces for mothers.

I'm also going to be actively working towards reminding myself that, oftentimes, two things can be true. For me, breastfeeding can be an immensely intimate thing — a bonding ritual between my child and myself. However, this doesn't mean that feeding in public has to devalue the experience or make it any less personal. When we give our children the nourishment they need, when they need it, wherever they need it, we normalize breastfeeding just a little bit more. We normalize the realities of motherhood just a little bit more. We normalize what should've been normal from the start.

More Like This
When Does A Baby Recognize Their Father? A Pediatrician Explains
Parents Have Thoughts After Court Orders Nursing Mom To Use Bottle In Custody Dispute
Chrissy Teigen Nodding Off While Breastfeeding As Miles Chats Away Is Too Relatable
Paris Hilton Is Officially A First-Time Mom
What Parents Are Talking About — Delivered Straight To Your Inbox