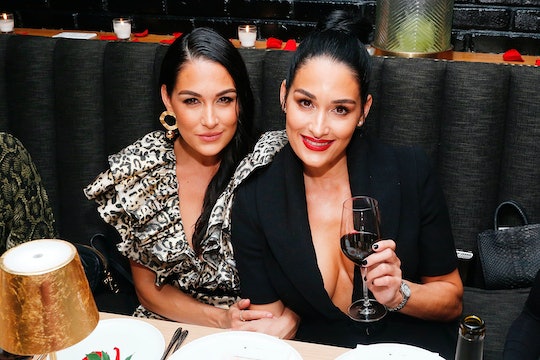 As if it's wasn't exciting enough being pregnant together, twin sisters Brie and Nikki Bella both welcomed baby boys one day apart. Nikki welcomed her son on July 31, while Brie gave birth to her little guy on Aug. 1.

The Total Bellas stars have been documenting their pregnancies on social media, as well as on their E! reality show, for months now. This Brie's second child — she shares 3-year-old daughter Birdie with her husband Daniel Bryan — while Nikki and her fiancé Artem Chigvintsev are first-time parents together. In a twist of fate that feels as though it was pulled straight from a Hallmark movie, the twins welcomed their babies one day apart.

In a touching Instagram post shared over the weekend that featured a photo of their hands, Nikki announced that she and former Dancing With Stars star welcomed a baby boy on July 31. "7/31/2020. Our baby boy is here and we couldn’t be HAPPIER and more in LOVE! Everyone is safe and healthy," the new mom captioned the post.

Shortly after, Brie shared a similar looking post, featuring her baby's hand along with her and her husband's, revealing that she gave birth one day after her sister. "It’s a BOY!!! 💙 8-1-2020. We are overwhelmed with joy and everyone is healthy!!!" she captioned the photo.

Back in January, Brie told People that she and her sister had due dates two weeks apart and said they thought people might think they planned it, but that was not the case. "Wait, twins being pregnant at the same time? People are going to think that’s a joke," she told the magazine at the time. "We both are shocked. People are going to think we planned it, but you can’t really plan pregnancy!"

At the time, Brie also told People that she and her husband, a former pro wrestler, had been trying to have a baby, while Nikki said her pregnancy with her new fiancé came as a surprise to her. “[It was] a total surprise... it took even me a good week to come to terms with like, ‘Oh my gosh, I’m pregnant.’ I’m not ready for it," Nikki told People.

So, no, not planned, but it might be safe to say these boys are destined to be best friends. In a tweet on Monday, Nikki said she "can't believe" she and Brie "had boys less than 24 hours apart!" "Honestly only us! lol," she tweeted. "And that I beat her. As you can imagine everyone said it was my baby & mines competitive side that kicked in! I can’t wait for our Bellas Boys to grow up together!"