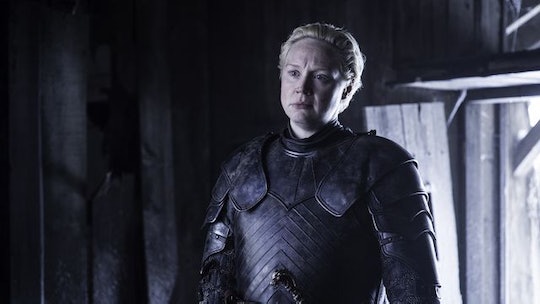 All Game of Thrones fans can agree that a ray of sunshine in another season of bleak coldness is the possibly budding romance between Tormund and Brienne of Tarth. OK, maybe the attraction is still one-sided at this point, but can't it be one of those situations where the girl slowly warms up to the dorky charms of the guy? Much like their possible love affair you didn't know you needed until now, the Brienne of Tarth and Tormund memes from Game of Thrones floating around the Internet are some of the best fan love letters to the prospective couple.

We can all agree that we fell in love with the sheer idea of the two when Tormund laid eyes on Brienne as she entered Castle Black with Sansa and Podrick flanking either side of her. He was like an adorable deer caught in the headlights of a noble lady-turned knight who could be the other half of his Northern power couple. Since that episode of Game of Thrones, fans have been rallying to get this couple together, even assigning them the requisite couple nicknames of Torienne, which both has a pretty nice ring to it.

Until Brienne gets over the fact that it's probably hard to figure out what to do when she gets the repeated attention from Tormund, fans can enjoy the memes and gifs that pay tribute to his obvious adoration that can only result in the two hooking up and having lots of awesomely strong Northern babies. OK, so maybe not necessarily the second part. But sooner or later our girl is bound to crack and realize that being in love with Tormund would kind of be the best thing ever.

To prove that fans want this to happen just as much as Tormund himself, this roundup of Brienne and Tormund memes shows just how much these two are meant to be together.

This "Check Yes Or No" Meme

The Fan Art Is Inevitable

This Meme Of The Two Enjoying One Shake, Two Straws

It's only a matter of time until the two get together. Let's hope it happens at some point during Season 6, before, you know, more people die.