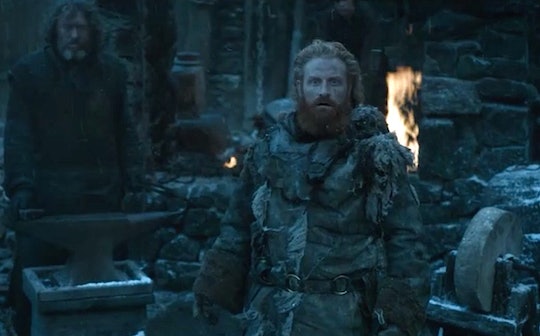 Will Brienne & Tormund End Up Together On 'Game Of Thrones'? The Looks Don't Lie

From the moment Brienne of Tarth rode into Castle Black, wildling Tormund's eyes were fixed on her, making it a sort of instant attraction that she clearly had no idea what to do with. But seeing Brienne and Tormund get together is kind of the love affair we never knew we needed. Seeing some sort of love bloom from the cold and snow of the north is the perfect thing to come from all of the war and torture we see in Game of Thrones. Really, it's the best thing since Jon and Ygritte, right? And kind of the same pairing — a wildling from north of The Wall and a soldier from Westeros. OK, maybe not exactly the same as the Jon and Ygritte pairing since the way that ended is still a fresh wound, but let's just pretend it's close enough.

Come to think of it, we've never seen Brienne in any sort of romantic relationship at all. She's been busy as the knight serving Lords and Ladies and as the hand to Renly Baratheon though, to be fair. And there were a few times during her travels with Jaime when it was pretty clear that she was catching some feelings for the Disney price-looking feathered hair dreamboat. So yeah, I can't really blame her there.

In Sunday's episode of Game of Thrones, Brienne rode in the gates of Castle Black, with Podrick and Sansa flanking either side of her like the knight she is. What fans didn't expect though was the look between Tormuns and Brienne. Well, that should be the way Tormund was looking at her, with immediate interest. Of course Brienne, though raised as a Lady, had pretty much no idea how to react to such attention and averted her eyes to continue making her way into the courtyard. It was like Tormund was spellbound by such an awesomely tough lady and I can't blame him.

But his interest was piqued and didn't stop there. In another funny season 6 scene, we saw Tormund chomping on a chicken leg while still keeping his eyes fixed on Brienne in a sort of weird mating display. And the scene is nothing if not incredibly awkward, but seriously funny. And it makes fans want to hardcore ship Tormund and Brienne together on Game of Thrones. There was a bunch of widened eyes not knowing where the Hell to look on Brienne's part, but given that Tormund is Jon's current BFF, he's already got a high-approval rating.

Not surprisingly, Twitter is abuzz with the new potential coupling, giving them a requisite couple name of BrieMund, which is kind of perfect and has a pretty stellar ring to it. And if getting a couple name doesn't solidify a potential pairing on a TV show, then you can consider them dead in the water. So Brienne and Tormund already have that going for them. Also, those glances between them. All of the exchanges of looks.

We don't know where these looks of what is seemingly attracting will lead to for Brienne and Tormund on Game of Thrones, but if it means a hookup, then yes please. Two of the most badass people at Castle Black should absolutely be pairing up and bonding over there Stark loyalty and general coolness. #BrieMund is for real, get hype, y'all.