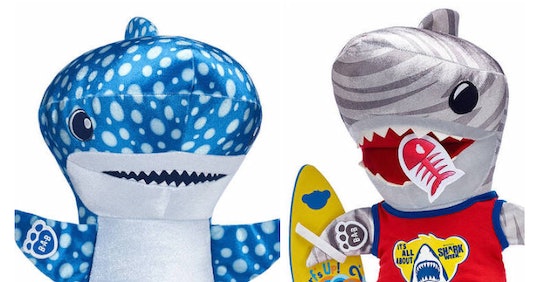 When you think of cute and cuddly characters that your child might want to snuggle with at bedtime, you’re probably thinking along the lines of the lamb, teddy bear, puppy dog, or kitty cat variety. But Build-A-Bear’s Shark Week collection just might have you rethinking your stance on sharks and their fierceness factor — and have you finding these predators quite precociously precious instead.

Just in time for the Discovery Channel’s beloved Shark Week, the stuffed animals are the latest addition to the Build-A-Bear line. The collection is available both online and in stores, and offers little fishies the chance to stuff (and become smitten with) their own adorable sharks. The sharks come in two different species — a whale shark and a tiger shark. Each one measures 16 inches tall, so they’re a substantial size, which makes snoozing together or a day at the park fun.

As for the sharks themselves, well, they’re super cute. Build-A-Bear has managed to play up the charming (think big eyes) while minimizing the scary (i.e. the size of their chompers), which could be traumatic for little kids. Because who would want to play with a toy that could potentially eat them, right?

Naturally, your shark shouldn’t swim around naked, so he’s going to need some stylish attire. Have no fear, there are super cute outfits for your sweet little shark to splash around in. You can choose from a Red & Blue Shark Week 2-pc Swim Set ($14), or even a Shark Week Hawaiian Shirt ($8). As for accessories, he can wear a Shark Week Hat ($7), which might be a little overkill (no pun intended), or he might swing a Surfboard ($8) under his arm and do an aerial. (Bonus points for the crafty moms out there who cut out a mock shark bite on the board.) But if you’re thinking of purchasing a voice box for your shark boy, you can just keep on swimming. Sharks don’t have the capability to make sound, reported PBS, so you might be able to save some dollars there.

The other cool factor is that by introducing sharks as friends and not foes, it makes them less menacing in a way and more relatable. In fact, if you’re looking to make an educational moment out of the shopping experience, you can explain the major differences between the sharks (a whale shark is the largest known fish alive, reported National Geographic, while the tiger shark’s noteworthy stripes fade when it becomes an adult). While both are predators, the whale shark is a filter feeder and is gentler, while a tiger shark has an appetite for almost anything.

Sadly, since the sharks are plush, they’re not exactly water-resistant, which might lead to some tears when you have to explain to your little one why Sharkie can’t take a dip with him at the pool or beach. But he can make major waves in the family’s washing machine, which should restore him back to his original beauty (just make sure to remove his voice box if you do opt to get one).

So when you swing by Build-A-Bear expecting to build, say, a horse or a unicorn, don’t be surprised if your child chooses to take a bite out of the moment by opting for these splashtastic sharks instead. Even if you’re not into sharks because, you know, they’re dangerous hunters who sometimes snack on unsuspecting swimmers, your child might be. And if at the end of the day, you wind up singing that "Baby Shark" song, blame Build-A-Bear (and Shark Week) for it.