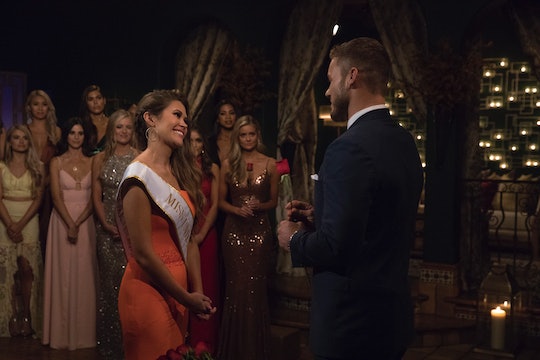 Caelynn Opened Up About Her Sexual Assault On 'The Bachelor'

Monday night on The Bachelor, Caelynn opened up to Colton about something much more serious and important in her past than her time as Miss North Carolina USA or her former feud with fellow contestant Hannah B. Instead, Caelynn opened up about her sexual assault on The Bachelor and it was an important moment for the show. She candidly explained to him that she was sexually assaulted at a college party during her sophomore year in 2014.

"They drugged our wine," she told Colton. "I woke up the next morning and was completely naked in my bed, and had no memory of the night before."

That next day, Caelynn learned that she had been sexually attacked after being drugged the night before and it's something she's had to live with for the past several years. Her decision to open up about it on The Bachelor shows how strong she is and it's definitely a Bachelor first.

Caelynn has, however, spoken out about her sexual assault before and previously used her platform as Miss North Carolina USA 2018 to shed more light on the subject and act as an example for other victims of sexual assault.

In a recent interview with People, Caelynn said that her goal is to use her own assault to help people who are otherwise afraid to come out about their own sexual assaults. "My focus is on survivors," she said. "I want to help other people who are hiding out and feel like their voices are restricted. I really am so much stronger now, in so many ways."

As she explained on The Bachelor, when she went to the hospital, she was informed that they wouldn't use a rape kit unless she'd formally filed a police report. "At that point, these were friends of mine and I wasn’t entirely sure what had happened, so I wasn’t positive I wanted to file a police report," she told People. "But later that night, I did, once I figured out what had really happened."

Sexual assault victims are often afraid to come forward with their stories, whether out of fear of judgment or the repercussions they might face for filing a police report. Caelynn admitted her own hesitation in doing so, but said that she's glad she went forward with reporting the sexual assault.

Although it was obviously a difficult topic for her to bring up on The Bachelor, Caelynn explained to Colton that she felt it was the right time to open up to him about her assault. The Bachelor had its share of revelations tonight, from Demi opening up to Colton about her mother being released from federal prison, to Tayshia telling him she's already been married once. But when Caelynn opened up to Colton about her sexual assault, plenty of fans on Twitter supported her decision to do that.

After Caelynn opened up to Colton, he revealed that a past girlfriend of his had been sexually abused and that he'd felt helpless in being there for her properly. And, as one fan on Twitter pointed out, the conversation showed a victim's side and the side of someone who has seen someone go through the same thing. It was powerful and important to watch. It was also a break in the usual Bachelor content viewers see by this point in the season.

Caelynn's story may have brought her and Colton closer together, but more than anything, it opened up an important dialogue on The Bachelor.