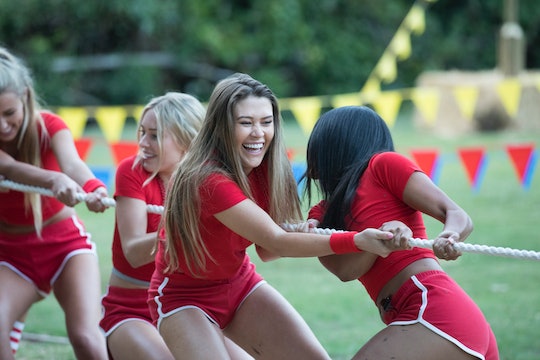 If you’ve tuned in to The Bachelor this season and somehow don't yet know that Caelynn was Miss North Carolina 2018, maybe we haven't been watching the same season. She’s the contestant who made her limo debut in a Miss Underwood sash that had her official title on the back, so maybe that will jog your memory. Fortunately for her, being a pageant winner isn't necessarily a full-time job, but fans are probably wondering when Caelynn was Miss North Carolina. The Bachelor contestant is one of two pageant queens this season, the other being her former friend and now Bachelor rival, Hannah B.

Caelynn was Miss North Carolina USA in 2018. That title led her to the road to Miss USA and while Hannah B. didn't place high enough on the rungs for it to be noted, Caelynn was the first runner-up in the Miss USA 2018 pageant. It's no wonder that she chose to wear her sash to get Colton’s attention on the season premiere. Pageants in general have obviously been a part of Caelynn’s life for years and the past couple of years were a whirlwind of glittering dresses, crowns, and roses. Kind of like The Bachelor.

Before Caelynn was *this* close to being crowned Miss USA 2018, she’d already done her share of the pageant rounds. She was named Miss Virginia Teen USA in 2013 and was the third runner-up for Miss Virginia USA in 2016 and first runner-up in 2017. Apparently, all she needed to do was relocate to North Carolina because it was there that she finally won first place and went on to compete for the Miss USA title.

It hasn't always been what seems like a cakewalk for Caelynn, however. As a child, she was diagnosed with encephalitis, which is an inflammation of the brain, and her parents were told she would never walk and would likely die before she reached maturity. She was also the victim of a sexual assault while in college. Because of this, she used her title as Miss North Carolina USA 2018 to work to help change Title IX policies in order to protect college students like herself.

Caelynn opened up about her assault in April 2018 and said that she’d been molested by a friend in his fraternity house during her sophomore year at Virginia Commonwealth University. She said that, at the time, she was afraid of being publicly judged and worried about the ramifications of speaking out about the attack.

Caelynn was able to use her platform as a pageant winner to bring even more awareness to the subject and work to make a difference because of her own stories. Say what you will about the ongoing feud between Caelynn and Hannah B. on The Bachelor this season, because Caelynn seems to have used her popularity for the greater good and you can't help but get behind that.

It’s still fairly early in the season to say for sure how far Caelynn will go and how deep her connection with Colton is, but Chris Harrison told Entertainment Tonight that Colton and Caelynn would have an important an emotional conversation this season. "She brings out a story, a personal story, that is one of the most emotional, revealing conversations we have ever had on the show. We were all very much taken aback," Harrison said. "So was Colton, and that kind of prompts things in Colton's life."

If the big conversation is about Caelynn’s past struggles, it will definitely a big moment for the overall season and might help her open up to Colton a little more.