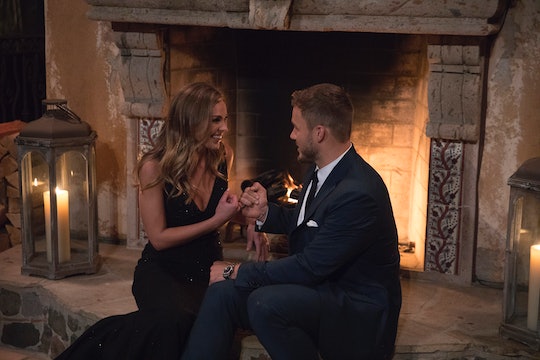 Caelynn & Hannah B Have A History From Before 'The Bachelor'

When you have multiple Bachelor contestants who are social media influencers or might have a connection to Bachelor Nation some other way, it's not unheard of that they might run in the same social circles. This season, however, it might go a little deeper than just casually knowing another contestant, since Hannah B. and Caelynn were both pageant winners in their respective states in 2018. So how well do Caelynn and Hannah B. know each other outside of The Bachelor?

The contestants could either be great allies this season or the most intense rivals we've seen since Corinne and Taylor's feud came to a head on Nick's season during that monumental two-on-one date. Actually, whether the women are friends or not, I can definitely see Colton being forced to choose between them on another epic two-on-one this season.

How close they are now remains to be seen, though. Hannah B. was crowned Miss Alabama 2018 and Caelynn was Miss North Carolina 2018, so they did know each other during their time competing for the Miss U.S.A. crown in 2018. Now, judging by Instagram alone, they seem to have been friends at one point at least. Since they were competing for the same crown, its expected that they came into contact with each other, but there are some posts that make it seem like Hannah B. and Caelynn were verging on BFF territory before The Bachelor came along.

You have to scroll down pretty far on their respective Instagram accounts to get to the goods, but on Caelynn's Instagram, there are some photos with Hannah B. and Lauren Vizza, Miss Louisiana 2018 and one with a caption of "Gosh I love them." There's another one where Caelynn refers to Hannah B. as one of her sisters and on Hannah B.’s Instagram around the same time, the feeling was mutual.

There are a few posts of the women in full Miss U.S.A. competition gear but some others of them just hanging out and eating together. Since pageant season ended, however, there haven't been any photos together on either of their Instagrams. While they might have been good friends while competing together, that friendship could have fizzled out faster than all of the Colton is a virgin jokes will during The Bachelor season premiere Monday night.

Unfortunately, neither have spoken about this themselves, but if it is the case that they were once buds and they're no longer Instagram official besties, then some major drama could play out between them this season. The competition is already going to be stiff with more than two dozen other women trying to get Colton's attention. Add to that two former pageant queens who may have already had a rivalry of their own and it's going to be an amazing trainwreck of a season.

When Chris Harrison introduced all of the Season 23 Bachelor contestants back in December, he hinted that Caelynn and Hannah B.’s history will affect each other and Colton this season. He didn't give away much more than that, but it seemed like there could be some major drama between them at some point. If they're no longer on good terms and find themselves in The Bachelor mansion together, it could get messy.

It's not a huge surprise that the two contestants already know each other, but it's also likely to do nothing good for either of their journeys this season. If they let any potential past rivalry come between either of them and Colton, he's liable to send them both packing as soon as he gets the chance. I probably wouldn't be able to help myself if I came face to face on reality TV with someone I had unresolved issues with, but something tells me they'll be at least a bit classier than I would be.