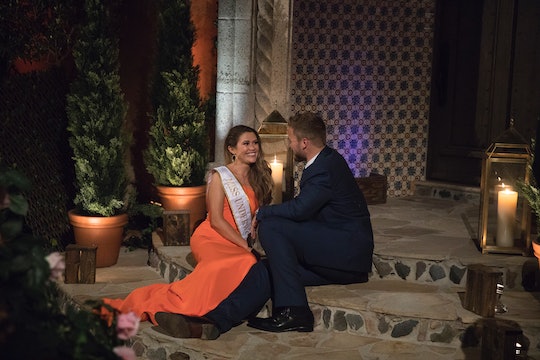 The only thing better than actually watching The Bachelor is getting to scour social media for any clues about who the contestants are each season. Caelynn, for example, already seems like someone who will go far, if only because she already knows how to coexist with dozens of women she’s competing against — since she was Miss North Carolina 2018. But what else is there to the former pageant queen, and more importantly, what is Caelynn’s Instagram? The Bachelor contestant’s Instagram is public, so you can check out all of her professional modeling photos and stills from the pageant before she makes her limo exit debut on Colton’s season of The Bachelor.

One of the things that stands out the most from her Instagram is all of the traveling she does. Although she’s from Virginia and lives in Charlotte, N.C., she’s a total jet setter and has been to the United Kingdom, Thailand, California, Georgia, and New York, just to name a few of her more recent destinations. It’s not clear if all of her travel is for work, pleasure, or a little of both as the current Miss North Carolina, but her apparent zest for adventure will probably be good for her going into The Bachelor this season.

Caelynn’s Bachelor bio says that she once flew to Japan for a first date, so putting herself out there on The Bachelor it seems isn't a big stretch. Her Instagram pretty much chronicles her journey as Miss North Carolina 2018 to competing for the Miss USA title while also showing her philanthropic work as a pageant queen. It also shows a totally relatable side to The Bachelor contestant, who knows her way around pizza and milkshakes. Regardless of what goes down this season and how long she lasts as Colton’s potential wife, that’s important to remember.

I do expect plenty of Caelynn’s fellow contestants to worry that she’s not on the show for the "right reasons" since she’s already proven that she enjoys the spotlight to some degree. But let’s be real here — almost everyone who goes on The Bachelor already enjoys getting attention, social media followers, and airtime. Grocery Store Joe last season on The Bachelorette was an anomaly.

Caelynn’s Instagram posts begin right around the time she began working toward the Miss USA pageant, so there aren't many clues about her personal or family life.

As far as the competition for Colton's heart goes, already, Caelynn might have a target on her back since it looks like she uses her Miss North Carolina 2018 title to make a memorable first impression on the Bachelor. I can already hear other contestants whispering about her and the sash, so chances are good she won't have an easy go at it with some of the other women at first.

The Bachelor is already a highly competitive atmosphere, so whether the women make friends or not, they’re still all pitted against each other in one way or another. Whether Caelynn gets the villain edit or not remains to be seen, but I have a feeling she won't have a hard time making it far this season.