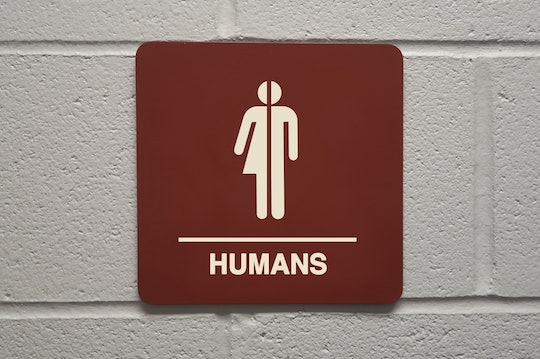 California Becomes The First State To Recognize A Third Gender

On Sunday, California Gov. Jerry Brown signed an immensely progressive bill concerning Californians' gender identity into law — and its implications for families are huge. With Brown's signature making it official, California became the first state to recognize a third gender — largely thanks to the tireless efforts of transgender activists and the support of California state Sens. Toni Atkins and Scott Wiener, who co-authored the Gender Recognition Act.

The law recognizes a third gender — "nonbinary" — that Californians can choose in addition to "male" and "female" on official state documents such as driver's licenses and birth certificates. The new law also makes it easier for people to change the gender listed on their birth certificates, and no longer requires a doctor's note to do so. It should be noted that in California, "sex designation" and "gender" appear to be used interchangeably in the context of this new law, as nonbinary can be now listed as "sex" on state driver's licenses and birth certificates.

With the concept of gender expression wrapped up in terms such as transgender, intersex, genderqueer, and gender fluid, the Gender Recognition Act finally validates that the human species expresses itself in more than just black and white gender terms of man, woman, masculine, and feminine — and this is huge for parents and families.

A survey of more than 12,000 people across 32 countries reveal that global attitudes about gender identity are changing, according to MarketWatch. The survey, conducted by international marketing group Havas, found that 61 percent of women and 46 percent of men believe "children should be raised in as gender neutral a way as possible so as to avoid rigid gender restrictions." Gender neutral parenting isn't some hot parenting fad: It's becoming more and more embraced by parents. Even Target has gender neutral clothing options now, placed smack dab in between the boys' and girls' departments in its stores.

For many, transgender rights are one of the millennial generation's major civil rights movement right now — and that's why California's nonbinary third gender recognition is so important for millennial parents and their families. As the law itself states, "The binary gender designations of female and male fail to adequately represent the diversity of human experience." Even the American Academy of Pediatrics recognizes that children who are questioning their own gender identity need support. In July, the AAP released a statement in support of transgender children, adolescents, and young adults, saying:

As pediatricians, we know that transgender children fare much better when they feel supported by their family, school and larger community... The AAP supports policies that are gender-affirming for children – an approach that is supported by other key professional organizations.

What this California law does is give parents the freedom to change their child's birth certificate to "nonbinary," and to allow their children to not only make their gender determination for themselves, but to make the act of changing their "official" gender even easier, without stigma or medicalization. In June, Oregon became the first state to allow its residents a "not specified" gender option on Oregon driver's licenses, designated simply with an "X." But California is the first state to legally recognize a third, nonbinary gender so broadly, according to BuzzFeed News. The move is precedent-setting.

Jody Herman, a gender identity law and policy expert at the Williams Institute at the University of California Los Angeles, told The Sacramento Bee, "California is a large state and if we can make these changes to our administrative systems, then certainly other states are capable of doing that." Herman continued, highlighting what the Gender Recognition Law means not just for California, but for the rest of the country.

As gender identities continue to expand and our concepts of gender continue to expand, governments are going to have to grapple with it and figure out how to be responsive to the way people understand themselves and live their lives.

If parents want to raise their children to be their most authentic, then it means dropping preconceived notions of gender. California has not only made it easier for parents to help their children feel supported in their gender identity on an administrative level, but they've basically said to the rest of the nation: Nonbinary exists and needs to be acknowledged — and it's time for us to catch up.