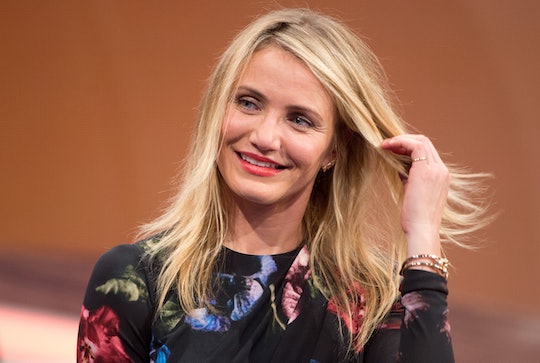 Cameron Diaz Joked She Has To "Live To Be, Like 107" After Having A Baby Later In Life

Becoming a first-time mom is challenging, no matter your age. But becoming a first-time mom during the "second half" of your life presents itself with a new set of questions and obstacles, as new mom Cameron Diaz recently detailed in an interview with Naomi Campbell. Specifically, Diaz joked that becoming a mom at 47 years old means she has to live well into her 100s so she can have as much time as possible with her daughter.

In Campbell's No Filter YouTube series, the now 48-year-old Charlie’s Angels actress and Avaline co-founder opened up about life with her husband, 41-year-old Benji Madden from Good Charlotte, and their daughter Raddix, who will turn 1 year old this December. In January 2020, Diaz and Madden announced the arrival of their first child together and shared on Instagram that Raddix has "captured our hearts and completed our family."

During her chat with Campbell, Diaz opened up about her decision to start her family later in life. "A lot of people do it the other way around — they get married and have a family in their youth," Diaz said. "I'm kind of doing it in the second half of my life."

With a laugh, Diaz went on to joke, "The only pressure for me is like I have to live to be, like 107, you know? So no pressure!"

While living to 107 is a tough thing to predict, Diaz is living in the moment and added in the same interview that this chapter of her life has been the "most gratifying."

"I really feel like this is my sweet spot and my happiest time in my life," she told Campbell. "Even with all the amazing experiences I've had in traveling and accomplishments of working hard and putting things into the world I'm proud of — I know, this is really the most gratifying time in my life, to be in this place, to get here.”

Diaz's outlook on parenthood has changed quite a bit over the years. In a 2014 interview with Esquire, for instance, the then 41-year-old actress opened up about how she did not see herself becoming a mother and was content at where her life was at the time. "It's so much more work to have children. To have lives besides your own that you are responsible for — I didn't take that on," she told Esquire in at the time. interview. "Not having a baby might really make things easier, but that doesn't make it an easy decision. I like protecting people, but I was never drawn to being a mother."

Since welcoming her daughter last December, Diaz hasn't given too many interviews about motherhood. But during an interview on The Tonight Show Starring Jimmy Fallon in July, she did say becoming a mom is "the best thing that ever happened" to her. So, needless to say, finding her "sweet spot" with her Mr. Right, whom she married in 2015, and doing life on her own timetable has led her to the happiness she has now with her little family.