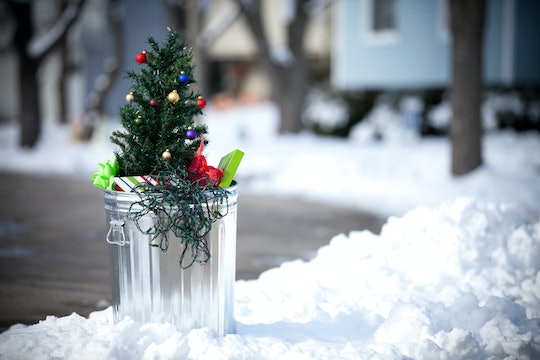 Can Artificial Christmas Trees Be Recycled? Think "Repurposed" Instead

There are lots of reasons to go with an artificial tree instead of a real one, like the lack of shedding needles. And it might be handy to save the tree from year to year. But if you're like me, you don't have a giant house with storage space for a whole tree, even if it does fold up. So what do you so with this thing in January? Can artificial Christmas trees be recycled?

In short, no. But that doesn't mean they have to end up in the landfill.

What? Why can't they be recycled? Artificial trees are made of plastic, and plastic can be recycled, right? Well, it depends on the type of plastic, and artificial trees are usually made of PVC (polyvinyl chloride), which is not recyclable. At the end of its life, an artificial tree will "spend 1,000 years in a landfill because it's not biodegradable, whereas the natural tree will go back to nature in the process of decay as nature planned it," Tim O'Connor, executive director of the National Christmas Tree Association, told SFGate.

Now, I know that some websites and places and people will say that you can recycle your artificial tree. They'll suggest you just put it out by the curb with the rest of your recycling. And the truth is, the recycling company will take it away. Because the recycling truck driver's job is to pick stuff up and put it in the truck. It's not his job to check recycling symbol numbers or to sort things. But there is someone — or some machine — that will do that sorting. And when they find out that you put a PVC tree in with all the other plastics, guess what they'll do? Dump it in the landfill. So if you want your tree to go away, by all means, put it by the curb. But just go ahead and mark it as trash, so you don't make the recycling folks go to all the trouble of sorting it just so they can throw it in the trash for you.

Still, it's true that your tree doesn't have to end up in the landfill... but recycling isn't your answer. Ever heard the phrase "Reduce, Reuse, Recycle"? Well, if recycling doesn't work, consider the "reuse" part of the phrase. It doesn't have to be you who reuses your tree: It turns out lots of places will take donations of used artificial trees, such as schools, community centers, nursing homes, and so forth. (Pretty much any place that might want to decorate for Christmas but doesn't have a big lavish budget.) They might even take it with the tinsel and lights still on it. Thrift stores may accept donations of artificial trees as well, so they can resell them. But here's the catch: Most of these places will only take donations when they're ready to decorate; generally sometime in about November. Because, like you, they don't have lots of storage space for last year's decorations. Which means you're stuck with the tree until then.

Unless you get creative, that is. With a utility knife and some wire, you can transform your Christmas tree into all kinds of different evergreen decor — or craft projects for the kids. Christmas trees are only seasonal at, well, Christmas, but a nice evergreen wreath can look good all winter long. Or you can use the branches as part of a year-round arrangement in a vase. Or just cut the branches apart for now, throw them in a box (they'll take up less space once they're separated from the trunk), and make a garland out of them next year.