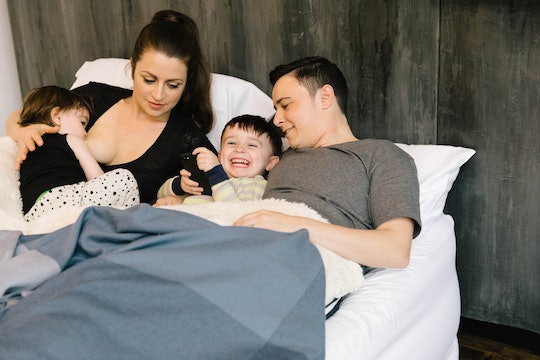 How Being 'Touched Out' Can Impact Your Relationship, According To Therapists

I remember one day in my daughter’s infancy where I felt like every inch of my body had been shared or exposed in some way. That night, I put her to bed and stood in front of the refrigerator — because, dinner — as our cat wrapped his body around my leg, purring for attention. Sensing my stress, my husband hugged me, and something about his touch was the final straw. “I cannot be touched by another living being!” I said, pulling away. Luckily, he was understanding, but I still wondered: Can being ‘touched out’ hurt your relationship?

“Being ‘touched out’ is a pretty common complaint among new moms, and there are at least two levels to it," Dr. Carol Queen, the staff sexologist at Good Vibrations tells Romper. “The first is being so intensely focused on at a bodily level, really practically 24/7. It’s not something most people — besides mothers — have experienced, even in an intense love affair. The other level is how hard it can be to switch from ‘mother’ mode to ‘lover’ mode, because a partner's caresses may seem overwhelming and also discordant.”

Queen says one way to deal with this is to work in as much non-touch time as possible. This might mean making sure your partner or a caregiver takes over to give you some hands-off time. Friends, relatives, and trusted child care providers can also be enlisted to help. “Before you can turn around and enjoy sexy touch fully, it may be necessary to minimize touch and get your body back to the degree that you can,” she says.

Stephen Duclos, a couples and sex therapist at South Shore Sexual Health Center in Boston, says it's also important to understand that the feelings occur in most relationships.

"In same sex and opposite sex relationships, there is almost always a high desire and a low desire partner," he says in an email interview with Romper. "The low desire partner is particularly vulnerable after the birth of a child."

Queen says it helps to lay some ground rules in order to ease back into things. She says some moms negotiate that during the post-birth phase, a lover doesn't touch their breasts because they become such a baby-focused part of the body. Some women also find that receiving nurturing and sensual touch, like massage, is helpful because it involves a scenario “when you're the recipient, not the giver, which can make a difference." Queen adds that for some women, a moratorium on being touched sexually doesn't mean they can't pleasure a partner with toys, oral sex, or hand jobs.

“But in all cases, it's important to recognize the feeling of ‘too much’ and realize that it's a temporary state with possible ways to cope that don't leave you feeling stuck and helpless,” Queen says. “The best way to stay aware is to notice what you're feeling — it’s a form of mindfulness, and helps you take care of yourself by asking for a break.” Consider savoring a long bath or sitting quietly while the baby is napping.

“And let ‘adult time’ include some focus on getting re-connected, step by step — not just a series of quickies that themselves feel like demands,” Queen adds.

Because after all, somewhere in the midst of the feeding, holding, rubbing, wiping, grabbing, and clinging is a woman whose body, although she has come to terms with sharing it with tiny humans, it is still very much her own. And that's pretty freaking important.