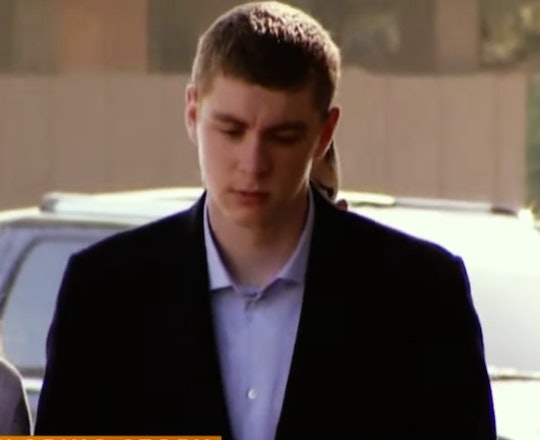 Convicted sexual assailant Brock Turner escaped a prison sentence of up to 14 years in June because one California judge believed that punishing him for sexually assaulting an unconscious woman behind a dumpster would "have a severe impact on him." Now, having served a measly 3-month jail sentence for his brutal crime, the former Stanford University student is a registered sex offender who's been banned from ever swimming competitively again. But, just as the judge ostensibly intended, not all of the 21-year-old's life prospects have been squashed, and Brock Turner can still go back to college — although it definitely won't be Stanford, where two graduates physically restrained him after discovering him on top of the motionless woman last year.

Turner's newfound status as a registered sex offender is a blazing distinction that will mar his opportunities and reputation for the rest of his life. To many onlookers, that's more than appropriate, because victims' advocates and sexual assault survivors vehemently protested Turner's lenient sentence — which they believed came as a result of his privilege as a white man and competitive swimmer at an Ivy League university — when it was announced June 2.

Turner himself seemingly attempted to eschew responsibility and blamed universities that "encourage drinking" for his actions in a statement to the judge. His father infamously implored the judge to go easy on his son for his "20 minutes of action" (!!!). Turner's attorney did not immediately respond to Romper's request for comment.

Armed protesters greeted Turner outside of his Ohio home when he returned from his shortened time in jail. Turner's neighbors will be alerted that he is a sex offender anywhere he lives for the rest of his life, according to CNN. He'll complete three years of probation and is not permitted to live within 1,000 of a school or playground. He'll have to submit much of his personal information, such as passwords to social media sites, to law enforcement.

"It will impact his ability to live a normal life in a lot of ways," ABC News' chief legal analyst, Dan Abrams, told the outlet. "And that'll be something that will stay with him for the rest of his life."

But the fact that his name is permanently included in the sex offender registry does not automatically disqualify him from seeking a higher education. In fact, TMZ reported that the Clark State Community College, a 2-year school that's about thirty minutes from Turner's parents' Dayton-area home, reportedly accepts any applicant with a diploma from an Ohio high school. The school does not have a specific policy for sex offenders, so technically, the former Stanford student might hypothetically be able to pursue a degree there — although whether or not the college will take him is another story entirely.

Representatives at a nearby four-year school called Central State University did not confirm to TMZ whether or not Turner's potential application would be accepted there, but said it would identify him as a sex offender through notices on campus if he were to enroll.

In an editorial for Cleveland.com, deputy director and attorney with the Ohio Justice & Policy Center Stephen Johnson Grove that there is no all-encompassing ban on allowing sex offenders into college classes on Ohio, and he believes that that's smart, as some circumstances that land people on the registry include them unknowingly having consensual sex with a minor, for example:

... Blanket rules will not serve us well — neither in community colleges nor in any other setting. Checking for criminal records and sex offenses for college students can be completely appropriate, so long as the answers to those questions do not trigger automatic exclusions based solely on the fact of conviction. Instead, criminal records should trigger a clear-eyed conversation about context.

There is no ambiguity, however, in what Turner did. He and his victim were both drinking at a fraternity party before the assault. But she passed out, unable to give consent as he continued to force himself onto her. He ran when two bicyclists discovered what he was doing, allegedly because he knew that what he was doing was wrong. And as far as the public has seen, Turner has not yet shown what it deems realistic remorse for what he did. Stanford has thus banned him from its campus — and other colleges and universities arguably wouldn't be wrong for doing the same.