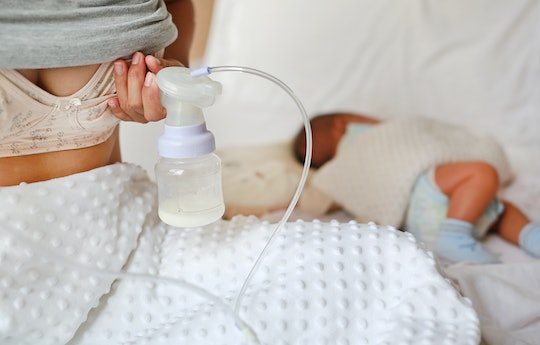 Dysphoric milk ejection reflex isn’t something most people have heard of, but expectant mothers should be aware of the condition before it can happen to them. In D-MER, milk release causes a surge of negative emotions for a breastfeeding mom. Can exclusively pumping help with D-MER? And what treatments exist for this rarely-talked-about issue?

As D-MER.org explained, breastfeeding mothers with D-MER feel a sudden onset of dysphoric, negative feelings before letdown of milk, and those feelings end within 30 seconds to two minutes. In more severe cases of D-MER, this dysphoria happens during all the milk letdowns in a feeding in addition to the first. Moms can sometimes have those feelings when pumping or after a spontaneous letdown, too.

Certified lactation consultant Alia Macrina Heise, IBCLC, the author of Before The Letdown: Dysphoric Milk Ejection Reflex and the Breastfeeding Mother, told Romper in an interview that it’s not known how many women experience D-MER, but in her 10 years of studying the condition, she has spoken with thousands of women who say they've lived through it.

“You’re talking about feeling fine and enjoying your life and your baby, and then 12 to 24 times a day for two minutes at a time, you want to kill yourself,” she explains.

Since D-MER is so newly recognized, the exact reason it happens isn't known. Still, some strongly supported theories exist. Dopamine is the main suspect, as Kelly Mom reported:

"This is a physiological response (not a psychological response) that appears to be tied to a sudden decrease in the brain chemical dopamine immediately before milk let-down."

“The strongest theory now is that dopamine is acting incorrectly when the milk release is triggered,” Macrina Heise agrees. “There is a study on lactating rats that shows when milk is released, dopamine drops and prolactin levels rise. The working theory is that with this relationship — because dopamine’s job with prolactin is to drop — in a mother with D-MER the dopamine is either dropping too far or too quickly, and disrupting the mother’s emotions in a negative way.”

Because it’s not known precisely what causes D-MER, there’s no cure-all or prescription to fix it. Macrina Heise says for some mothers, exclusively pumping can help minimize the sadness they feel when milk lets down.

“Some report pumping is easier. Physiologically, a pump is not as effective as a baby, and mothers who pump generally have lower milk supplies, so there could be something physiological happening to ease that dysphoric experience. Or, it may be easier to pump and feel like you just have to get through it, rather than feeling like you have to gaze lovingly at your baby while you’re in the depths of sadness.”

For others, Macrina Heise says having the baby directly at the breast is what helps most. “There are some mothers that feel they can better handle the dysphoric feelings when they’re in contact with their baby, and pumping seems to make it worse. This could be a matter of personal preference or experiences. If a mother feels more connected, safer, and like a better mother because the baby is at the breast, she’s pulling from a better state to deal with that negative reaction.”

Macrina Heise says some women find relief from taking natural supplements or medications to support their dopamine levels. These are questions to take to a doctor. But in many cases, moms experience a lot of relief just from learning what D-MER is, and knowing that they’re not alone.

“When mothers rate the severity of how they felt D-MER disrupted their life before they knew what was going on versus after, they feel their experience is much easier to cope with with that knowledge and understanding.”

For mothers who don’t want to seek medication or natural options, practicing self-care is key. Starting from a place of well-being means D-MER can’t make them sink quite so low.

“When it comes to sleep, exercise, diet, and caffeine use, it’s very easy for our bodies to get thrown off balance when those things are suffering,” says Macrina Heise. “D-MER is going to bring her lower if she’s already struggling. Giving the mom as much support as possible in order to keep her in the best state of wellness means the D-MER is going to impact her less because she’s pulling from a store of wellness versus unwellness.”

Women who think they may be experiencing D-MER should consider seeking out a lactation consultant. Macrina Heise says not all types of providers are up to speed on D-MER, but most lactation consultants are familiar with the condition and how to help.

“A lactation consultant is a good place to start because she won’t be questioned. Moms who go into general practitioners are having to take some proof and case studies and some are still told they have postpartum depression, and that can be very discouraging. There are a lot who are plugged into OB practices, so if she’s looking for a prescription option or needs the help of a medical provider, working with a lactation consultant in an office is the best idea.”

More Like This
Reddit Is Stunned By Mother-In-Law Trying To Breastfeed Her Granddaughter
Please Stop Telling Moms To Breastfeed As Baby Formula Shortage Worsens
This Underwear-Clad Mom Saved Her Pet Goose From An Eagle While Breastfeeding
Ashley Graham On The “Fun, Organized Chaos” Of Raising Twins