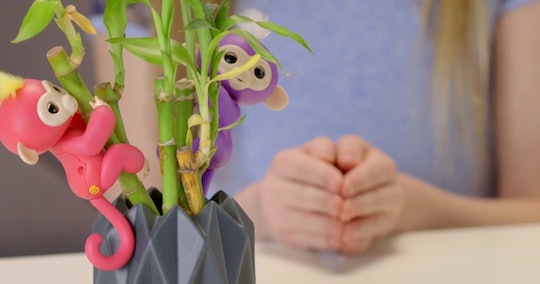 Can You Take Fingerlings In The Bathtub? Here's What You Need To Know

If your little one isn’t already begging for a Fingerling, I promise you will start to hear the name soon. Fingerlings Baby Monkeys have already become one of the most talked-about toys on the market, and the little robots are projected to become the “must have” fad toy for the holidays. But before you decide whether to add a Fingerlings critter to your shopping list, there are some things you’ll need to know. What can your kid do with a Fingerling? And are there things that your child absolutely shouldn’t do with their new robot pet? In other words, can you take Fingerlings in the bathtub?

I’ll save you some Googling here: Fingerlings are a new collection of robotic plastic monkeys that wrap around your (or your kid’s) finger and react to touch or movement in literally dozens of ways. Fingerlings are made by toy manufacturer WowWee, the company probably best known for its line of other robotic toys, including the Robosapiens and Roboraptors.

But while its other product lines are impressive, in the Fingerlings Baby Monkeys, the toymakers managed a combination of impressive, cute, and affordable that will be difficult for parents to resist. The Fingerlings website describes the more than 40 possible ways you can get the toy to talk, sing, or laugh with you, from stroking its little head, to hanging it from a backpack, or even rocking it to sleep.

In a review of the line of robo-monkey toys, Mashable reporter Lance Ulanoff wrote that the incredible number of sounds, animations, and gestures the Fingerlings can display was due to a high number of sensors embedded in its plastic “skin.” He writes:

It can respond to a tap on the head or a touch (there are two touch sensors). Blowing in its face elicits a response, as does clapping your hands (you may need to take the monkey off your finger for that), cradling it, or dangling it upside down. All told, there are 40 different animations and reactions, so it can take a little while to discover them all. The toys will make a kissing sound when you blow in their faces and react with glee when you turn them upside down (the tail is perfect, by the way, for hanging it off a finger or the edge of a desk).

According to his review, there’s even a way to make the toy monkeys break wind — a feature that I have no doubt kids will go nuts over. But the user has to discover just the right gesture to make it happen.

The downside to all of that tech, though, is that it’s unlikely the toys will do well if put in water. There’s no mention on the toymaker’s website of the robotic critters being waterproof. And a company video walking users through ways to interact with a Fingerling mentions that if the baby monkey stops working an adult should replace its four 1.5 volt alkaline button batteries, a common type used in other things that aren’t waterproof like watches and calculators.

Still, if your child does decide to test the toy’s water capabilities, the price is low enough that you may not go totally berserk. When the tiny monkeys first hit the shelves this summer, Fingerlings retailed at around $14.99 per figure, and the colorful little robots could be found at Toys R Us, WalMart, and and Target.

But a warning: as their popularity has (quite predictably) gone through the roof, the Fingerlings toys and playsets have become nearly impossible to find. What’s more, WowWee has introduced exclusive Fingerlings “friends” that can retail for $70 or more — including, an honest-to-goodness unicorn.

Much like the holiday craze around the Furbies, Hatchimals, and Tamagotchi (remember those?), this fad is already showing every sign of becoming a real thing for parents. My only advice is to prepare yourself for when your kid asks about adding one to his or her wish list. And good luck, you guys. See you in the trenches.