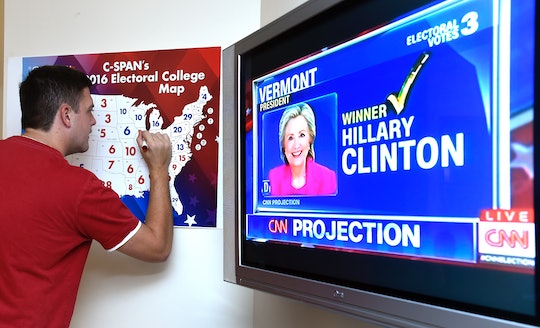 Can Hillary Still Win? The Race Is Closer Than Everyone Thought

With the election coming to a close, everyone in country is glued to their TV, watching the electoral votes roll in. With one candidate only needing 270 to cinch the presidency, supporters of Democratic presidential candidate Hillary Clinton are starting to get a bit nervous as Republican presidential candidate Donald Trump pulls forward. Even though the race is closer than initially expected, can Hillary still win?

In short, yes, she can. According to FOX News, Clinton took a battleground state, Colorado, and there are still a few other swing states up for grabs, including Florida and North Carolina. NPR predictions earlier today gave Clinton 274 electoral votes with solid and lean Democratic states and the current electoral map at CNN shows that, so far, neither candidate has won a state that they were not either expected to win or that wasn't a toss-up between the two candidates.

But it's still a little close for comfort. Although Clinton could win even if she doesn't win Flordia, which as a whopping 29 electoral votes, Trump is showing some strength in the battleground state according to The Washington Post. His win in that state doesn't necessarily mean he wins the presidency, but it definitely pushes him forward with the electoral votes.

For Clinton to win, she can't afford to lose any of the states that she was expected to win. But as the country waits for the west coast results to come in, it's still a little too early to call a clear winner or loser here. The New York Times noted that Ohio is still up in the air and that the Hispanic population definitely surged in the voting booths for this election. Basically? There are still some variables at play here.

Things are changing every moment. Despite the fact that The New York Times reported that some other factors could still be considered, the newspaper has predicted a Trump victory. He seems to be gaining traction where people didn't think he would and as he pushes forward, everyone seems to be on edge.

FiveThirtyEight has gone back and forth between the candidates this election night, but currently, the website has predicted Clinton wins at 52 percent. It's not a landslide by any means, but the tight race seems to expand and constrict as the night goes on and the country has a long way to go before it has a clear-cut answer.