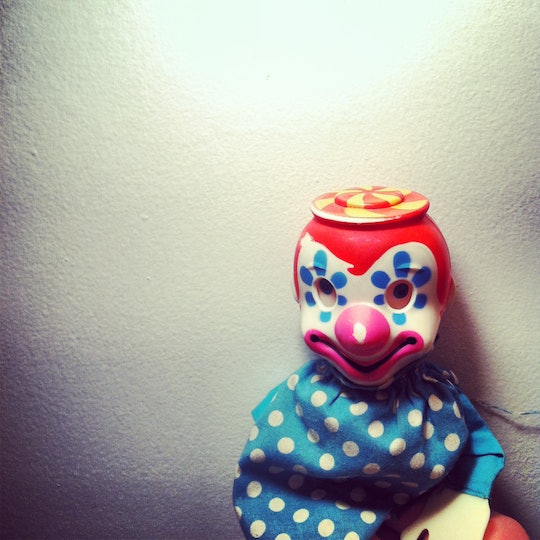 Can Kids Go Out On Halloween As Clowns? It Could Be A Risk

With Halloween approaching and the Creepy Clown Epidemic of 2016 in full swing, sending a kid out trick-or-treating in some goofy, oversized shoes and a clown mask is no longer the innocent act it was just last year. Pranksters and even some criminals embracing the craze have been freaking people out throughout the United States since August, prompting some police departments to warn against wearing that familiar, sometimes menacing garb. As the copycat trend continues to expand, there's also a serious concern that people in clown costumes could be at risk of violence at the hands of scared or amped up vigilantes. So, while kids can go out on Halloween dressed as clowns in most places, it's probably not the best idea this year.

The creepy clown craze was born at the tail-end of summer, when children in a South Carolina apartment complex reported that clowns (which were subsequently never spotted by adults) were beckoning them into the woods and attempting to lure them into an abandoned home. It's the stuff of ghost stories told with a flashlight illuminating the face, or urban legends passed from generation to generation of elementary schoolers — which might be why it took off the way it did.

Now, months later, there have been a slew of arrests associated with clowns terrorizing unsuspecting Americans all across the country, and even abroad. In Chicago, a 13-year-old girl was arrested after she allegedly asked a "clown" on social media to kill one of her teachers. Police in Oklahoma are seeking two suspects who allegedly pulled a woman out of her minivan, extinguished a cigarette on her skin, and wrote "clown posse" on her face — all while dressed as clowns.

These incidents — and the many dozens or even hundreds like them — are likely unrelated, as there's no evidence that these clowns are in cahoots with one another. Still, the threats, real or perceived, are serving to hype up some people. At Pennsylvania State University this month, hundreds of students flooded the streets armed with tennis rackets, lacrosse sticks, baseball bats, and hockey sticks in pursuit of clowns, that they, predictably, did not find.

And therein lies the crux of why a witch or a ghost or Princess Elsa would be a better bet for kids' Halloween costumes this year. A clown costume has the potential to incite panic or hysteria, even if it's totally unwarranted.

"We are warning teens and young adults not to get involved in this fad, of dressing up as clowns to cause fear," Pasco County, Florida, sheriff Christopher Nacco told NBC News in an email, "because eventually someone is going to perceive their actions as a threat and take justice in their own hands."

That's one of the driving impetuses behind some local governments' and school districts' decisions to temporarily ban clown costumes. The Tredyffrin/Easttown School District in Philadelphia made a rule against the wearing of "costumes of a clownlike figure" during its Halloween festivities, and one Mississippi county passed an ordinance this week that subjected anyone wearing a clown costume through Nov. 1 to a $150 fine. Even Target opted to pull clown masks from its shelves and website for the time being.

And besides being very, very bad professional clowns' entertainment businesses, the epidemic has potentially put them in danger as well. "If [people] see in the news that we are evil, they can take a machete or a gun and kill a clown," Tomas Morales, president of the Brotherhood of Latino Clowns, told BBC News.

Chances are slim that someone who saw a child dressed as a clown on Halloween would turn to violent action. But as the creepy clown epidemic itself shows, people are erratic and whacky and love a good conspiracy. Even though it's decidedly not really a thing, let's leave kids out of the "clown posse" for good.