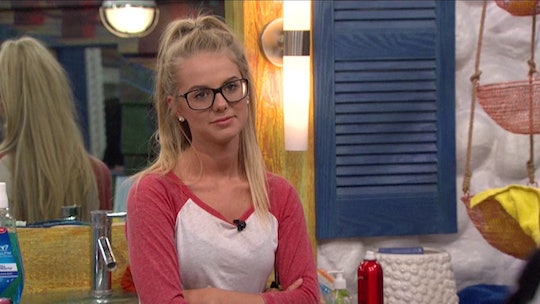 Can Nicole Win 'Big Brother 18'? This Is Her Second Chance On The Show

When Nicole showed up on the premiere of Big Brother 18, there were mixed reactions from the other houseguests. Some of them saw her as an immediate threat, and others saw her as a worthy ally, since she had already been in the Big Brother house. So, can Nicole win Big Brother 18 now that she has a second chance at the show? And for that matter, how likely are her fellow houseguests to actually vote for her in the end? True, she hasn't garnered any enemies on Big Brother just yet, and she has been flying under the radar just enough to build alliances without ruffling too many feathers, but still — anything can happen in the coming weeks, and they've only been in the Big Brother house for a little under a month.

Outside of the house, fans are already rooting for Nicole. Partly because they're still hungover from the love they had for her when she was on Big Brother 16, and partly because so far this season on Big Brother 18, Nicole has been a champ. She's already proven that, once again, she can hold her own. Now, that doesn't really negate the fact that there is an alliance called the Anti-Vets, dedicated to over-throwing the veteran houseguests, which includes Nicole.

If Nicole wins Big Brother 18, it will be her first win for the show overall and total proof that comebacks are for real. As it stands, Nicole is in three alliances, including a "final 2" deal with Frank — which would be a hard combination to deal with, should the stars align that way in the end. But the Big Brother 18 houseguest can hang with the best of them, and even though there have only been two official nomination ceremonies, she has managed to slip by so far. Can Nicole win Big Brother this time? If she keeps playing like she is, it might be in the cards for her.

She Has The Experience To Get Far

There is definitely something to be said for having been on Big Brother before. Some of the newbies on Big Brother 18 are probably right to be weary of a returning houseguest, because they're absolutely right in assuming that she has some experience on them. She didn't win in Big Brother 16, but she got pretty far, even coming back after an eviction.

It isn't hard to love Nicole, because she's nothing short of adorable. But more than that, she's also kind of a real and normal person. She isn't going around the house, jumping from group to group, building so many alliances that she forgets who else is in which one. Instead, Nicole is nurturing the alliances she's already a part of. And the Twitter fans of Big Brother 18 have noticed how worthy she is of their support. Does that matter as much in the grand scheme of winning Big Brother? Maybe not, but it says a lot about how easy it is to just love the girl.

She's Had Two Years To Recoup

Not that you need to really recover from spending time in the Big Brother house, but Nicole isn't super fresh out of the thick of it. She's had time to be home and watch another season, while maybe comparing it to her own and taking notes. OK, hopefully not that drastic.

She's Been High On Fans' Radars

And rightfully so. Not only is Nicole a returning houseguest to Big Brother, but she's just likable. If she wasn't already near the center of attention at first because she was one of the four surprise returning houseguests, then her personality was enough to win over fans. She just hasn't particularly screwed up yet, and she knows how to play the game. She wasn't afraid to put Jozea up for eviction, but also wasn't dramatic enough to call him out on slandering her all over the house. Basically, she's pretty cool.

She Doesn't Have A Showmance (Yet) To Distract Her

When Nicole finally got together with Hayden in Season 16 of Big Brother, their showmance wasn't exactly a distraction, per se, but not being involved in one at all certainly can't hurt. Especially if it ends up being a fleeting one that ends while they're still on Big Brother. But without another showmance there to distract her, Nicole can keep rising up the ranks on Big Brother 18.

Whether or not Nicole will win Big Brother 18 is anyone's guess at this point, since we're still so early into the new season, but with fan support and general support in the house (i.e., not being targeted just yet), she's on the right path for sure. This is Nicole's second chance, ya'll, so hopefully she uses it wisely.