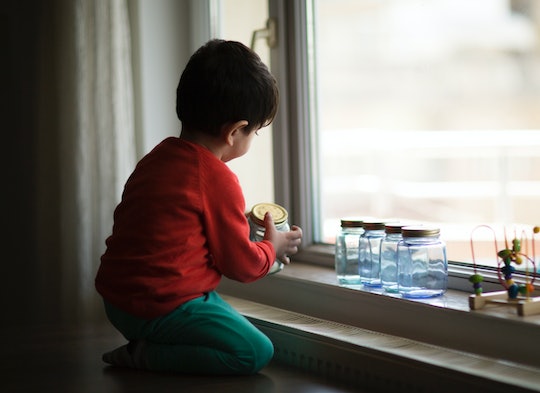 If You Think Your Toddler Might Have OCD, Here's What You Need To Know

It’s not uncommon for little ones to ask the same questions over and over (are we there yet?) or collect hoards of random objects they find at the park, so it's difficult to know what separates typical toddler behavior from something more serious. If your kid seems to be displaying certain behaviors like excessive worrying or repeated actions, you may be wondering if a toddler can be diagnosed with Obsessive Compulsive Disorder (OCD). The answer, as it turns out, is rather complex.

“In order to diagnose OCD, an individual must experience obsessions (unwanted thoughts, images, or urges) and compulsions (rituals). Children are not typically able to articulate this type of symptom presentation until school-age (approximately 6-8 years of age),” Licensed Clinical Psychologist Erica Aten tells Romper. “Therefore, toddlers cannot accurately or appropriately be diagnosed with OCD.”

OCD usually appears at around 9 or 10 years of age, per the International OCD Foundation (IOCDF). There are other diagnoses including ADHD, Autism Spectrum Disorder, and Tics/Tourette’s that can share similar symptoms to OCD, Aten explains, which complicates the diagnosis in children.

“OCD can be detected at any age but it’s less commonly diagnosed in toddlers versus in elementary or high school-age patients, in part because toddlers are intermittently obsessive by nature and because, for young kids, these behaviors can often be attributed to other issues like stress or poor sleep,” Whitney Casares M.D., pediatrician and author, tells Romper.

OCD develops at “at the intersection of genes plus environment,” Casares says. “A child may have a genetic predisposition to OCD based on her family history but stressful or traumatic events are also risk factors.”

OCD-like behavior is nuanced, but certain obsessions and compulsions (like apologizing after doing nothing wrong, repeatedly saying lucky words or numbers, or excessive worry about germs or a preoccupation with cleaning) are some ways OCD may present in children.

Neurological, biological, and autoimmune dysfunction can all play a part in the onset of OCD, though Aten says it can also come about from PANDAS or PANS (Pediatric Autoimmune Neuropsychiatric Disorder Associated with Strep/Pediatric Acute Onset Neuropsychiatric Syndrome). The link between these two conditions is medically complicated and also rare (effecting just one in 1000 children, according to Child Mind Institute), but it’s thought that when certain illnesses like strep, mono, and walking pneumonia go untreated in a child, the antibodies produced to fight the illness can attack the basal ganglia part of the brain, resulting in abrupt OCD-like behavior.

One thing to keep in mind is that toddlers have a natural inclination to order their worlds. They may like to line up their stuffed animals in a very specific way (that you can never get right) or they may only want to eat off one plate. “It’s when those obsessions are persistently completed in an effort to reduce anxiety or distress and to comply with a set of internal rigid rules that clinicians take notice,” Casares tells Romper.

Making diagnoses even trickier is the fact that there is no medical test to diagnose OCD (though there is one for PANDAS/PANS, Aten says). “Doctors diagnose OCD based on observation and reports from the child, parents, and potentially other collaterals (teachers or other caregivers),” Aten tells Romper.

If you do become concerned about your child’s behavior, it’s best to address the symptoms first with their doctor. “Simply attempting to talk a child out of these behaviors usually isn’t effective and can sometimes make them worse,” Casares says.

While there is no cure for OCD, a child’s symptoms can wax and wane over time. "Oftentimes I tell individuals and families that OCD can be similar to diabetes in that there will be periods of time where symptoms are stable and unnoticeable, however, there will likely be periods of time where symptoms are present and interfere with daily life,” Aten says. "OCD symptoms are often exacerbated by other stressors and can come and go to varying severity throughout life.”

She adds that Exposure and Response Prevention (a type of Cognitive Behavioral Therapy) is the most evidence-based approach in treating OCD in children. “Many children experience a significant reduction in OCD symptoms with a combined treatment plan that includes psychotropic medication, exposure and response prevention, and parent coaching,” Aten says.

Whitney Casares, M.D., MPH, FAAP, author of The New Baby Blueprint: Caring for You and Your Little One and host of The Modern Mommy Doc Podcast