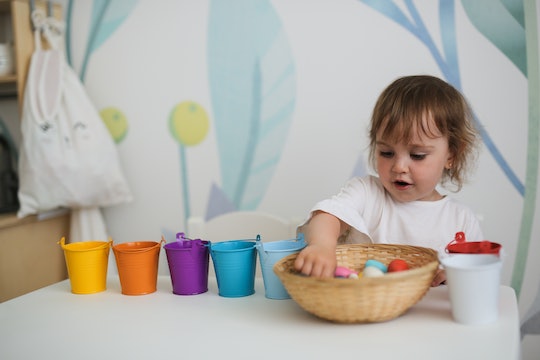 Toddlers Love Sorting For The Same Reason You *Need* To Organize

Perhaps you are the parent of a "sorter." Do you have a 3-year-old who loves nothing more than dumping out a box of crayons, only to sit and carefully organize them by color and size, like some little Go-Gurt stained Marie Kondo? If so, you may be wondering: Why do toddlers love sorting?

One doesn't usually think of toddlers as "orderly." Probably because most of them are known to leave rooms looking like they hoisted a small grenade over their shoulder and into the toy box just before they exited. But some little ones really are like little one-person home organization businesses, and love nothing more than sorting things like toys, buttons, or blocks.

"Toddlers are separating and moving out in the world more. They are learning and growing at a very rapid pace," says Dr. Tovah Klein, director of the Barnard College Center for Toddler Development and author of How Toddlers Thrive. She tells Romper that sorting is not only totally normal, it's actually a sign of toddlers attempting to give a sense of order to their world, especially as they get older. "There is much to explore and take in," she says. "It can get overwhelming. Sorting and organizing is a way to make sense of their world, and gives them a sense of control. 'I can put things in their place.'"

There are, however, occasions when a child's sorting tendencies might be a cause for concern. If your child "will not leave the house without completing an organizing ritual, or these behaviors also occur with poor sleep, depression, or odd eating habits, OCD might be the cause," according to SpecialNeeds.com (a resource site for parents). Autism is also associated with "ritualistic behaviors," the site explained. "If the organizing behaviors occur along with other concerning behaviors, such as delayed speech and verbal expression, body rocking or other self-stimulating behavior, and poor eye contact, you might want to speak with a medical professional."

Dr. Klein echoes this idea, saying that sorting is only worrisome if it becomes all-consuming: "The issue is, does this behavior take on a life of its own so that the child is limited in other areas, such as relating to others? Does the behavior dominate their time and they cannot be moved away from it?"

If not, then a love of sorting is a very normal activity for toddlers and, as Klein says, simply a part of the learning process. "It teaches them what goes together and has similarities, and about categories such as colors and size."

And again, a lot of their desire to put everything in its proper place has to do with creating a sense of comfort. "Sorting makes their world feel more manageable," says Klein. "That sense of organizing their world helps them feel safe and in control of a big world with much to see and learn in it."

This makes total sense to me. I know if I'm feeling anxious about something I have zero control over (something like, say, the whims of Kim Jong Un), well, I love nothing more than reorganizing my desk or my closet. Sometimes when we're overwhelmed, all we can do is try to create a small sense of order in our lives. My cowl neck sweaters organized by color will of course do nothing in the way of stopping a nuclear winter, but don't they look pleasing there on the shelf?

Now, before you get all excited about handing the laundry basket over to your toddler and expecting them to sort the socks, do bear in mind that another thing toddlers really like is to do absolutely everything on their terms. Meaning, they're going to sort what they want to sort. And they will sooner put your socks into the dishwasher than they will match them up by color.

Dr. Tovah Klein, director of the Barnard College Center for Toddler Development, and the author of "How Toddlers Thrive"

More Like This
A Guide To RSV In Toddlers
Can Elderberry Help Prevent Illness In Kids? Doctors Weigh In
When Is Thanksgiving? All About Turkey Day 2022
23 Frightfully Fun Facts About Halloween