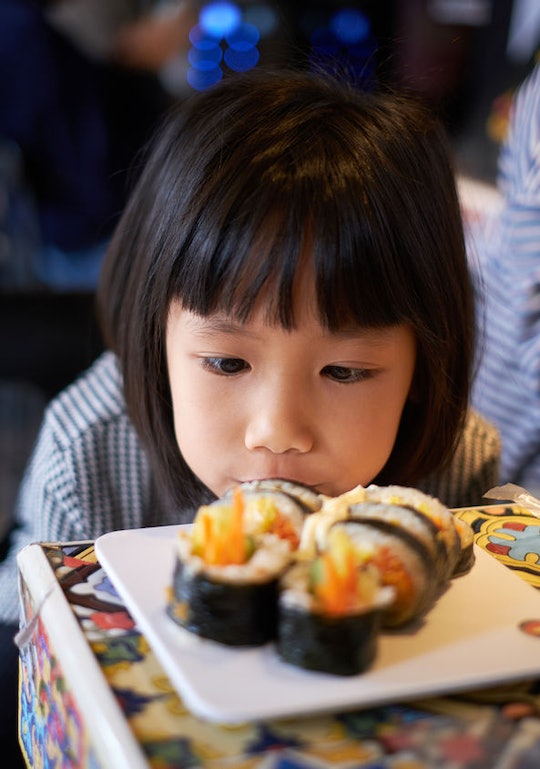 Here's What You Should Know If Your Toddler Wants To Try Sushi (It Could Happen!)

My daughter began eating table food fairly early on, starting with bits of buttered toast and moving on to samples of rice and beans with guacamole. My son was slower to take to non-baby food, though he did enjoy soft dishes like unflavored yogurt and hummus. But of all the "grown-up" dishes I tried on them, I steered clear of one particular food for a long time: I wasn't sure if toddlers can eat sushi safely, and I didn't want to take any chances. So they went through their early childhoods without tasting spicy yellowtail rolls and salmon nigiri, and even now, many years later, they prefer the teppanyaki grill to the sushi counter when we go out for Japanese food.

Was I right to be cautious? Possibly. "In some countries and cultures, it's common for children to eat raw fish," pediatrician and best-selling author Tanya Altmann, M.D., tells Romper. "It’s not as generally accepted in the US, mainly due to fear of a bacteria, parasite, worm or other infection from eating raw fish."

Indeed, the federal Food and Drug Administration (FDA) advises that both pregnant women and children under 5 should eat only cooked fish and other sources of protein (such as meat, chicken, and eggs). Dr. Altmann backs this up, but adds, "For my patients whose culture it is to eat raw fish, or families wanting to let their toddler try raw fish sushi, I recommend you eat from a reputable place that you know to decrease the chance of infection."

Does this mean family trips to Benihana or Sushi Zen are a no-go until your children are well past kindergarten age? Not at all. There are plenty of kid-friendly alternatives to raw fish at Japanese restaurants: teriyaki chicken; fried rice; udon (noodles); tempura (batter-fried vegetables or meat); fried or steamed dumplings; miso soup.

For children who want the sushi experience, restaurants almost always have vegetarian roll (maki) options such as cucumber, sweet potato, or avocado. Even the ever-popular California roll is okay for young kids, since the "crab" is actually a paste of cooked, processed fish, explained HuffPost. In my pre-K classroom, I recently had a student who would bring a bento box lunch consisting of balls of sushi rice and sheets of dried seaweed. She would wrap the seaweed around the rice with the expertise of a master sushi chef, and munch away blissfully.

"As long as it isn’t a choking hazard (such as putting an entire large roll in their mouth), a toddler can safely eat pieces or bites of a vegetarian sushi roll or cooked fish roll," affirms Dr. Altmann. Of course, you'll also want to exercise caution if your child is allergic to shellfish, because of the risk that the roll might have come in contact with a surface used to prepare shrimp or crab.

If your toddler is adventurous enough to try traditional sushi (or sashimi, which is high-grade raw fish slices served plain, per Benihana), Dr. Altmann advises keeping a careful eye out for symptoms such as vomiting, diarrhea, stomach pain, fever, or other indications of food-borne illness. "While the most likely cause of infectious diarrhea in this age group is viral and will go away on its own," she says, "I have seen young kids with more serious infections from travel, swimming or eating contaminated food that needed treatment with medication, and even hospitalization."

As with most things parenting-related, the toddler-and-sushi question comes down to a judgment call. If you're not sure whether your child's system can handle raw fish, play it safe and stick with cooked options until they're a little older. If you're comfortable letting them share your sushi platter, choose a reputable restaurant and go for it. Either way, just having kids who eat something other than pizza, chicken nuggets, and mac 'n' cheese is a victory in itself.