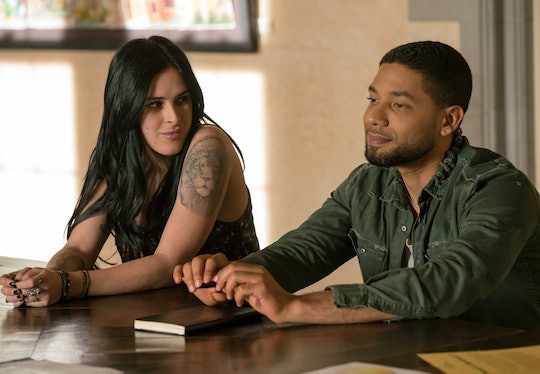 Tory Ash Could Be Up To No Good On 'Empire'

Even though Lucious alternates between being the villain and the patriarch who supports his family on Empire, there always has to be another underlying bad guy to round out each season. And this time around, could it be Jamal’s very own new BFF? After learning that Tory will now be working with Lucious to get her career back on track, fans are likely asking: can Tory Ash be trusted on Empire? And honestly I’m inclined to agree with their concern.

She’s already been something of a negative influence on Jamal, convincing him to bust out of rehab to hit up a studio and play music together. Granted, that isn’t evil exactly, but it could mean that she’s capable of using him altogether. It was no secret that Tory’s career needed a major overhaul and if getting that from Lucious was what she needed, then she might have been after that all along.

She did say during the first meeting with Cookie that she wanted to meet Lucious instead, so that’s probably evidence enough that right from the get go, Tory may have seen Jamal as a future paycheck. To be fair, Jamal and Tory seem like they have good chemistry together, but being as unreadable as she is, Tory has been hard to completely trust on Empire so far.

It didn’t take long to get Cookie onboard with Tory. But when Cookie told Jamal to make sure the hard drives were wiped clean at the end of the day (so as to keep their recordings private from Lucious), he was still able to waltz in that evening and have a listen himself. Does that mean Jamal forgot to clear the tapes or did Tory leave it there for him to find? Naturally, Lucious liked what he heard in Tory and Jamal’s unique sound together.

In the end, he poached Tory’s talents for a track he was working on and just like that, Tory betrayed Jamal on Empire. It’s hard to say if it was a purposeful betrayal and Lucious using her music was probably directed toward Cookie more than his son, but it meant a worrisome future for the new Empire recording artist.

So can Tory be trusted on Empire? Fans all know how untrustworthy Lucious is and can’t seem to help being. Tory’s been hard to read at times, but she also seemed genuinely interested in keeping Jamal healthy and off drugs. If the opportunities arise though — and even if they don’t include Jamal — chances are Tory will take those opportunities to help get back her music career.

Like all good things on Empire, any chance of Tory being good might come to an end by the time Rumer Willis’ multi-episode arc on the series is over. Jamal is finally off drugs and was strong enough to officially get Derek out of his life romantically and professionally, so something has to go wrong. And if Tory starts recording exclusively with Lucious, then that might send Jamal down a dark path once more.