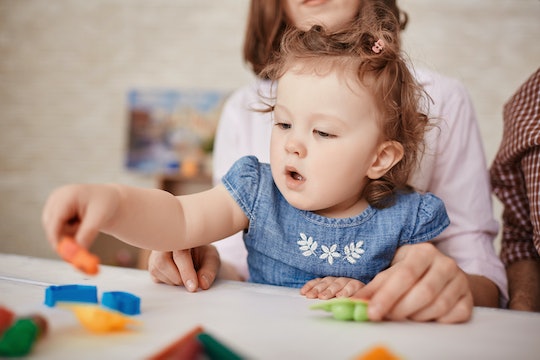 Can We All Just Agree That Playing With Toddlers Is The Goddamn Worst?

I love my child. Truly, madly, deeply adore her. She's my sun and stars. She's the funniest, most charming, weirdest, best 2-year-old I know. I enjoy spending time with her reading books, sharing a bowl of popcorn, or talking about our day before bed. But I swear the next time I have to actually play with her, I might poke out my own eyes. Call me a terrible mom or whatever, but I know the truth, and so do you. Playing with toddlers is the goddamn worst.

Engaging in play with a 2- or 3-year-old child can feel like an eternity. First of all, they do everything at a snail's pace. That burgeoning sense of self brings out their inner "do it myself" beast that, no matter what, cannot be tamed. But the fact that it takes them forever to put Mr. Potato Head's ear in the hole doesn't completely explain the excrutiating phenomenon. Playing with a toddler like playing in a black hole. You could swear you've been putting together an ocean life puzzle for an hour, but when you look at the clock only 10 minutes have passed. Turns out that octopus exists within a wrinkle in time. It's strange because while play seems to run in slow motion, you never have enough time for a shower or to finish your coffee while it's still hot.

Another annoying aspect of playing with toddlers is the fact that they never get tired. Ever. My kid is obsessed with playing outside. We don't have a swing set or anything, so that means "play" involves a lot of running. And you know what I hate more than anything? Running. I'm not in the best shape, so I'd just as soon let the dog chase her around. And don't get me started on coloring — the activity that truly never ends. Normally, I find it to be therapeutic, but I'm talking about using my fancy colored pencils in my Game of Thrones coloring book and not my kid demanding cats, dogs, cars, houses, and happy faces on her magnetic board. Draw. Erase. Ask for more. Repeat steps 1-3.

From ripping up books to breaking crayons in half, toddlers are veritable wrecking balls.

As anyone with a toddler knows, they have a lot of... ahem... executive leadership potential. That's code for "bossy." I know that term has dropped out of popularity because of its negative, gendered connotations, but I'm referring to all toddlers. Because every last one of them likes things their way. The other day, my daughter took her baby doll into her room, placed her in her bed, and covered her with a blanket. Taking me by the hand, she directed me to sit on the bed, where I found a collection of fairy tales. Her instructions to me were as follows: "You stay here with baby. Read Jack." Then she turned off the light and left. I'm pretty sure she watched me on the monitor to make sure I didn't leave out anything about the cow, beanstalk, or giant.

Toddler play is also frustrating because they're just so damn destructive. From ripping up books to breaking crayons in half, toddlers are veritable wrecking balls. I mean, what is so satisfying about dumping things out? Throwing sh*t, I kind of get, but come on. My daughter loves to play blocks with me because she knows I'll build a tower that she can knock down. Rude. One time, I made fake crying noises to try and get her to understand that it's not nice to ruin something someone has made. The next time I constructed a palace, she took a plastic gorilla, made him destroy it, and then announced, "Uh-oh, monkey."

Constant reliance on you for stimulation is going to become a problem. It's unsustainable for you and a crutch for them.

Toddlers have the attention span roughly equivalent to that of a Labrador retriever puppy. Heaven forbid you get interested in something because your little one will soon be on to the next thing, and you better be on board. According to Washington Parent, the attention span of a 2- or 3-year-old is approximately 15 minutes. Frankly, I think that's a bit of a stretch. In my house, we go from Noah's Ark to Legos to riding her y-bike in the same amount of time. My dad calls my niece (same age as my daughter) a shark because if she stops moving, she'll die. It's short attention span theater, people, and it is exhausting.

When play time is said and done, guess who's on clean up duty? You. I'm not saying I let my kid turn my house into a FEMA disaster area and then walk away, but the bulk of the tidying falls on yours truly. According to What to Expect, it's not reasonable to expect a child that age to manage all their things. It's a job for the two of you, but let's face it, one of you is not always amenable to the task. More times than I can count, I have taken my toddler by the hand and forcibly had her pick up and put away a toy... while she's screaming bloody murder. The "Clean Up" song makes the whole process sound so much more fun than it actually is.

I'm not saying I let my kid turn my house into a FEMA disaster area and then walk away, but the bulk of the tidying falls on yours truly.

Transitions are not a toddler's strong suit. According to Parents, toddlers lack a sense of time and live in the present moment, which makes stopping an activity somewhat traumatic. They suggest advance warnings and straightforward language. I use both with my daughter ("We can stack the cups one more time, and then I'm going to start dinner"), but once she's gotten a taste of playing with mommy, she's not so keen on letting me go. The second I get up, she's in full-blown tantrum mode. In case you were wondering, it's really hard to chop an onion with a wailing toddler pulling on your leg.

OK, so I've made it pretty clear that playing with my toddler is not my favorite thing, but beyond selfish reasons, I think it's important to consider that it might actually be good for little ones to play alone. I'm not saying ignore your kids, but do give them the gift of unstructured play time. According to Daily Parent, solo play has benefits ranging from more imagination and creativity to improved confidence and self-direction. Constant reliance on you for stimulation is going to become a problem. It's unsustainable for you and a crutch for them.

Look, I'm not going to stop playing with my kid any time soon. I do think it's important that I be present for her, but I also recognize that she benefits from playing on her own and with her peers. She doesn't need me all the time. And that's a good thing, because one more round of "Ring Around the Rosie" might push me right over the edge.