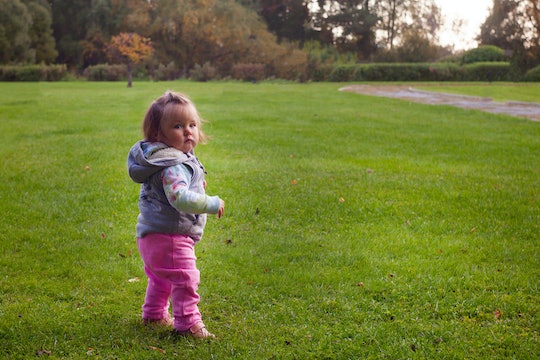 8 Reasons I Let My Toddler Play Outside Unsupervised

I'm not a helicopter mom, but I'm not exactly a free-range parent either. I like to think of myself as safely ensconced somewhere in the middle. I insist on certain safety measures, like car seats and helmets. I prefer to keep my 2-year-old in my sight line, but not necessarily within arm's reach. But I also think it's important for her to learn to make her own choices, deal with natural consequences, and, eventually, trust herself. For that reason, and a few others, I let my toddler play outside unsupervised. Frankly, folks, it's amazing.

I'm best described as an "indoorsy" kind of person. I'm allergic to everything under the sun, and I really hate being in any way uncomfortable. I put cold on the top of that list. The past few months, it's been a convenient excuse for not going outside to play, but living in sunny Texas, it's starting to wear thin — especially with a toddler keen on playing in the backyard. I'm not sure how I discovered this, but I recently realized that she's pretty OK out there on her own. Ever since then, we've maintained the same daily routine. After nap, she brings me her shoes and heads outside to run around with the dog, draw on the patio with chalk, and play with her outside toys. Every day. Until dinnertime.

At first, I was hesitant to share with anyone that I was allowing my child to play outside by herself. Was I being selfish? Neglectful? I don't think so. In my opinion, what's more dangerous than the possibility of injury or abduction is what's lost when kids spend all their time in front of screens. When you take reasonable precautions, autonomous outdoor time can be completely appropriate for toddlers. So with that in mind, here's why I won't be making an apology anytime soon: