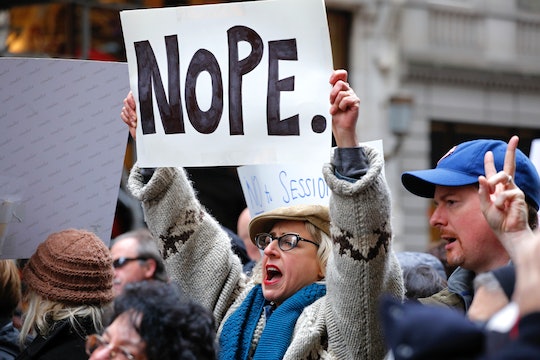 Backpack Guidelines To Know For The Women's March

Friday might be one of the biggest days in the complicated life of President-elect Donald Trump. He will officially be sworn in as the 45th President of the United States. He can do a little dance, make a little love... generally get down that night. But Saturday is the day millions of women across the country are really gearing up for. That will be the Day of the Woman, the day protesters will march on Washington to let Trump know we are watching him. As people diligently prepare for Saturday, many are wondering about security and if you can bring a backpack to the Women's March. Because it's going to be a long, emotional, historically significant day, so, naturally, you'll need to pack snacks.

If you are planning to join the hundreds of thousands of activists set to march on Washington at 10 a.m. Saturday, you might want to do a little research. Because not just any old backpack will be allowed, due to size restraints and safety concerns. If you would prefer not to have your bag searched by security, get you a clear backpack no bigger than 17in by 12in by 6in. Worried you won't be able to find a clear backpack? Get creative!

Backpacks are clearly (get it?) going to be a necessity on Saturday, as well over 200,000 protesters plan to descend on the nation's capital with one common goal: to make sure ALL voices are heard. As the Women's March website states in its mission:

So what will you need to put in your backpack?

On top of your new, trusty clear backpack, there are other essential items to consider. Comfortable shoes are important, as are warm layers. D.C. in January isn't precisely the tropics, after all, even if it will be slightly warmer than usual. Be careful not to pack anything that could be seen as a weapon, and pay attention to regulations regarding flags and posters (found on the handy FAQ page of the Women's March website, along with transportation guides, etc).

And not to get too icky, but don't forget to pack your belief in the power of peaceful activism. Because that's the whole damn point.