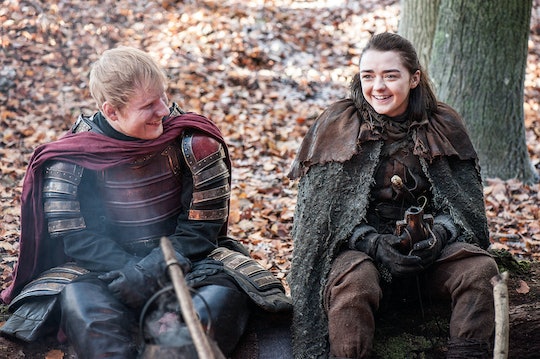 Buying Ed Sheeran’s 'GoT' Song Could Prove To Be Difficult

When Arya followed the melodic sounds of a Westeros acapella band in the forest, I had high hopes that she was somehow about to be led to Gendry, who’s been rowing solo for literally years now. Instead, she stumbled upon some young Lannister soldiers, including Ed Sheeran in his half anticipated/half dreaded cameo. But since the boy can obviously sing, can you buy Ed Sheeran’s song from Game of Thrones?

Diehard book readers likely recognized the song as "Hands of Gold," which is sung by Symon Silver Tongue in the Game of Thrones books, but for strictly show watchers, it seemed like a way to give Sheeran a cameo without forcing him to recite any awkward lines. Still, Arya wasn’t wrong when she said it was a "pretty song."

Sheeran’s character, who’s listed on IMDB as simply "Lannister Soldier," gave Arya a cheeky response of "It’s a new one," when she asked about the song, leading fans to wonder if it was his way of sneaking in a new single of his own during his Game of Thrones cameo.

The whole interaction with Arya and Sheeran, along with the other Lannister soldiers, gave Arya a glimpse into another side of war and soldiers in general. And thankfully so far, she didn’t slaughter the lot of them since they seem to be babies compared to some of the more hardened soldiers we’ve seen on the show.

With all the talk of gold hands in the Season 7 premiere, the lyrics to Sheeran’s song from Game of Thrones could have been double (or triple) meanings behind them. Jaime’s golden hand was rudely mentioned by Euron Greyjoy (sporting the Westeros rocker look apparently), while Cersei announced that Tyrion had been made Hand of the Queen to Daenerys. But the lyrics themselves can probably be examined several different ways as far as the different storylines go and include: "For hands of gold are always cold, but a woman’s hands are warm."

Even though it doesn’t look like Sheeran’s Game of Thrones song is immediately available to download, it was still probably the best way to give the singer his cameo on the show without having it be too contrived.