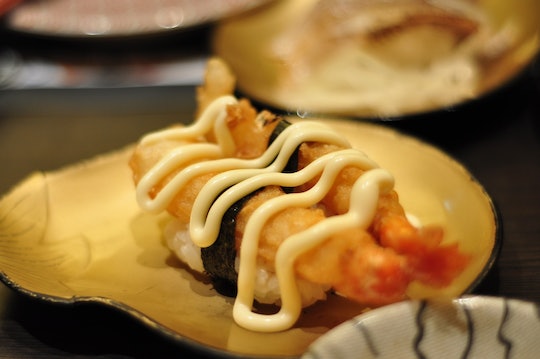 Turns Out, Not All Sushi Is Off Limits During Pregnancy

Two of my favorite things to enjoy pre-pregnancy were wine and sushi. Boy was it a special evening when my husband and I went out for sushi and split a bottle of red. In fact, when we were trying to conceive for what felt like forever, with every negative test, we’d go out and have sushi and wine because, you know, I could since I wasn’t pregnant yet. Now that I’m pregnant, I sure miss those outings since I’ve heard sushi is a no-no. But is it all off limits? Can you eat tempura sushi while pregnant? Apparently not all OB-GYNs think sushi of any kind is unsafe during pregnancy.

According to Dr. Yvonne Bohn, an OB-GYN at Providence Saint John’s Health Center in Santa Monica, California, she allows her patients to eat raw sushi while pregnant, but “only from reputable restaurants and with restrictions.” She tells Romper, “I implore them not to eat large fish, like albacore tuna, because of the elevated mercury content." And as such, obviously, tempura (fried) sushi is OK because it’s cooked, according to Bohn.

I guess the no sushi while pregnant thing depends on the doctor, much like the 4 ounces of wine is safe argument. The warnings Bohn gave related to eating sushi while pregnant included avoiding shark and tilefish in addition to the albacore tuna she mentioned above. And obviously making sure the sushi restaurant was clean and well-kept, with only fresh ingredients — I guess like any restaurant you'd feel comfortable dining in.

According to the American Pregnancy Association (APA), the warnings to avoid sushi come from possible exposure to bacteria and “increased exposure to mercury.” The APA also noted, however, that "women also need to remember that not all sushi is uncooked, and most fish contain essential nutrients and vitamins needed for growth and development of their baby.

“[The Natural Resource Defense Council] (NRDC) has compiled a list of fish used in sushi and where they rank in their levels of mercury. Many of the main sushi type fish contain high levels of mercury and should be completely avoided or eaten very rarely. If you have further questions regarding sushi, you should talk with your healthcare provider to get their recommendation,” the APA added.

So unless you have a photographic memory or you want to potentially print off this list and the APA’s list of safe sushi, maybe just remember to stick to freshwater eel, salmon, roe, and shrimp for your pregnant raw sushi adventures. However, it seems like tempura sushi is perfectly safe (and totally delicious). As always, clear this decision with your doctor before partaking in delicious sushi, and maybe even 4 ounces of wine. They may have a different idea of what’s healthy for you and your baby based on your medical history or your pregnancy.