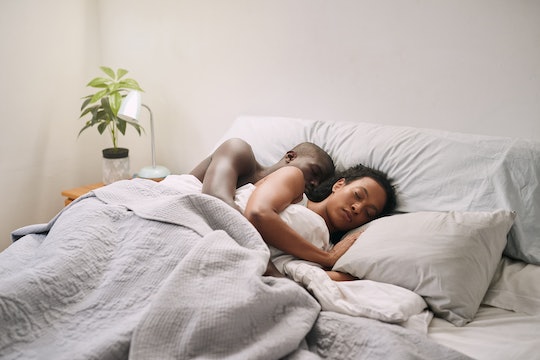 Can You Get Pregnant If The Condom Is Left Inside You? Don't Panic Yet

Birth control options have come a long way in the past several years. There are many different types of pills, as well as the more set-it-and-forget-it alternatives like the patch, the shot, the ring, IUDs, and even the arm implant. But the only contraceptive that protects against pregnancy and STDs is still the condom, and with condom use comes a fair share of user error and a small likelihood of slip-ups and slip-offs. While it may not happen often, it’s still good to know if you can get pregnant if the condom is left inside you.

Dr. Angela Jones, M.D., OB-GYN at Healthy Woman Obstetrics and Gynecology in Monmouth County, New Jersey, says you absolutely can. “If a condom slips off while inside the vagina, it’s likely that the contents are going to spill as well,” she says. Anytime semen gets into or even near your vagina, pregnancy can happen, noted Planned Parenthood. If the condom slips off and gets stuck inside you, your risk of becoming pregnant is increased because semen will likely spill out of the base of the condom into your vagina. From there, even one sperm can travel up through your cervix and uterus to your fallopian tubes, where it can live for five days, reported Mayo Clinic. If you are ovulating within the five days after, you can become pregnant. There’s also the obvious concern of contracting an STD with a condom mishap, says Dr. Jones.

So what do you do if you realize the condom is still inside you? Refinery 29 suggested sweeping it out of the vagina with clean fingers. If it is stuck a little higher up than your fingers can reach, try squatting and bearing down while you try to get it out. If you still can’t retrieve it, head to your doctor or the emergency room, because if left in for more than a few hours, it can lead to an infection. “It’s nothing to be embarrassed about — we remove lots of things from vaginas,” says Dr. Jones.

Once you’ve successfully removed the condom, it’s time to think about pregnancy. Dr. Jones says emergency contraception, also known as Plan B or the morning-after pill, is on order to reduce your chances of pregnancy. It may also be a good time to talk to your doctor about STD testing.

How can you prevent a condom from slipping off? For one thing, size matters when it comes to condoms. Verywell Health explained that condoms should be long enough to cover the whole penis and still leave a little space to hold semen, and the width should be snug enough to comfortably stay on. It’s also about how you put the condom on. “It is important to use good condom techniques of withdrawing before the penis goes completely flaccid, and using a hand at the base of the penis to secure the condom upon withdrawal,” explains Dr. Jones.

Accidents happen. Planned Parenthood says condoms are 98% effective in protecting against pregnancy, but only 85% once you add in human error. Make sure you’re using condoms correctly going forward and remember that even if life throws you curveballs, it’s all about how you handle it. (In this case, by slowly and carefully pulling a condom out.)

This article was originally published on July 21, 2017