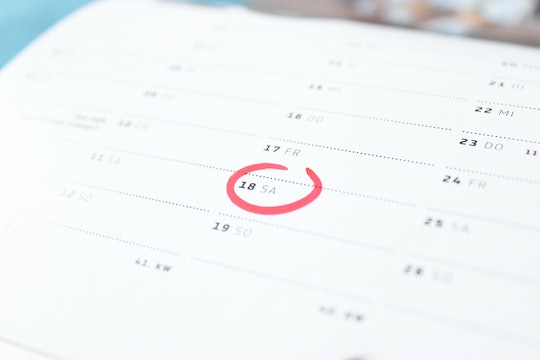 Can You Get Pregnant If You're Not Ovulating?

Women's menstrual cycles are pretty straightforward. You get your period, you ovulate, you get your period again, and the new cycle begins. That time period when you ovulate, however, is pretty important for geting pregnant — it's the most fertile time for women. But what about the rest of the cycle? Can you get pregnant if you're not ovulating?

More Like This
Pool Cannonballs Are Pretty Much A No-Go During Pregnancy
Can You Go Down A Water Slide If You're Pregnant?
Lightning Crotch Can Actually Tell You These 7 Things About Your Pregnancy
Could Increased Anxiety Mean You'll Go Into Labor Soon? Experts Explain

Ovulation happens every month when an egg is released by one of your ovaries into the fallopian tube and waits there to be fertilized by sperm, according to the American Pregnancy Association (APA). If the egg is not fertilized, your uterine lining will shed, which means you'll get your period. The APA estimated that women will usually ovulate anywhere from 11 to 21 days after the first day of their previous period.

So a woman's cycle can be broken down into four parts — menstruation, pre-ovulation, ovulation, and post-ovulation. The beginning of your cycle is the first day of your period, and the APA noted that it's unlikely you will get pregnant while you're menstruating, unless your cycle is very short, like between 21 and 24 days, and ovulation occurs within the first seven days of your cycle.

In the pre-ovulation phase, right after your period ends, your chances of getting pregnant are increased, because sperm can live inside your cervical mucus for up to seven days, noted Parents, and will be readily available to fertilize your egg as soon as it is released.

Ovulation is the most fertile time, when your chances of getting pregnant are highest, explained the APA. Your body is creating an environment perfect for fertilization, with a higher body temperature and stretchy cervical fluid, making it easier for sperm to thrive and travel to the egg.

Post-ovulation, added Parents, is when your egg is no longer waiting to be fertilized, and your chances of getting pregnant are very low. Your ovaries realize they don't need to release any more eggs this month, and your cervical mucus dries up, acting like a plug to prevent sperm from entering your uterus.

So can you get pregnant if you're not ovulating? It really depends on how close you are to ovulation and if the sperm is there, waiting for your egg to be released. There are a variety of ovulation kits and fertility monitors available that can help you track ovulation so you know when to hit the sheets. Knowing your cycle and your chances of pregnancy is important, regardless of whether you're trying to get pregnant, or just trying to avoid it.