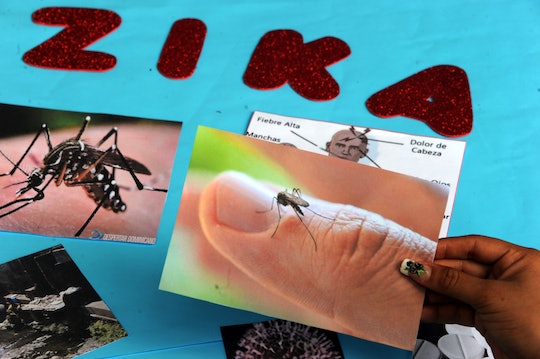 Can You Get Zika From Oral Sex? New Report Says It's Possible

A new letter published in The New England Journal of Medicine this week provided startling news about the Zika virus. Scientists in France reported a case in which a man likely transmitted Zika to a woman in Paris, after having had oral sex together back in February. So can you get Zika from oral sex? This new report suggests it's possible.

More Like This
The FDA Has Authorized The Pfizer Vaccine For Kids As Young As 12
Survey: Just 30% Of Parents Would Get Their Kids Vaccinated Against COVID-19 Right Away
30 Quotes for National Brothers' Day
The Nonmonogamous Moms Next Door

According to the letter published in NEJM, a 46-year-old man who had traveled and stayed in Rio de Janeiro, Brazil from December to February became infected with Zika. He reported that his symptoms, which included, fever, chills, asthenia, and rash, began on Feb. 7 and subsided by Feb. 10 – the day he arrived back home in France.

In the weeks following, however, the patient said he had sexual contact with a 24-year-old woman (from Feb. 11 to Feb. 20). According to the report, the 24-year-old woman developed Zika-related symptoms on Feb. 20, and both subjects tested positive for Zika on Feb. 23. Their sexual contact involved seven sexual interactions which included, vaginal sexual intercourse without ejaculation and without use of a condom, and oral sex with ejaculation.

The test results supported the scientists' theory that Zika can be transmitted by oral or vaginal sex – though they could not rule out that the transmission occurred through saliva, since the male patient tested days after the onset of his symptoms. His negative saliva results could have been affected by the time he was tested, leaving the possibility of deep kissing as an avenue of transmission open, but apparently, no cases have proved that. "... To our knowledge," the researchers wrote, "no cases of transmission through saliva have been documented."

Dr. John T. Brooks, an epidemiologist who studies sexual transmission of the Zika virus at the Centers for Disease Control and Prevention, told The New York Times, that he doesn't consider deep kissing a threat in terms of Zika transmission.

"Casual kissing has got to be safe because, if it weren’t, don’t you think we’d see a lot more Zika?" Dr. Brooks said. "Every mom who kissed her baby would pass it on. To be sure, we’d have to look for deep kissing in the absence of sexual contact, and that’s hard to find.”

Scientists and public health officials have previously confirmed that Zika can be transmitted through sexual contact with a male partner. It continues to be important to remain informed on new information about the Zika virus, since scientists and public health officials are still striving to understand its transmission, spread, and its connection to neurological disorders and birth defects. In the meantime, the CDC regularly updates useful tips on good prevention practices — so keep an eye out... and maybe reconsider that vacation romp if you're planning on getting pregnant anytime soon.