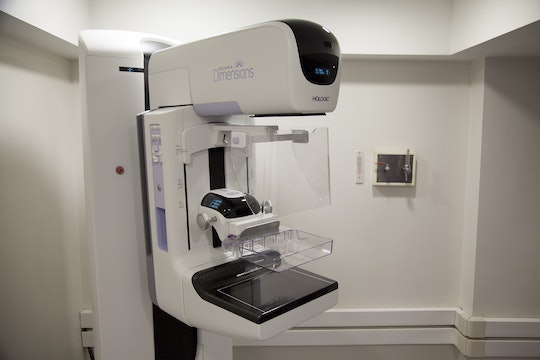 Here's What You Need To Know About Mammograms During Pregnancy

Unfortunately, one in eight women in the U.S. will develop “invasive breast cancer over the course of her lifetime,” and “in 2017, an estimated 252,710 new cases” are expected to occur, according to breastcancer.org. With those stats, it’s super important to make sure you’re doing your part in self-examining yourself often, and always getting a breast exam done yearly at your check-ups. But what if, heaven forbid, you find a lump while you’re pregnant? Can you have a mammogram during pregnancy? Your breast health is always important, but as they change and develop during pregnancy, they need even more attention.

According to Dr. Richard Reitherman, medical director of breast imaging at Memorial Care Breast Center at Orange Coast Medical Center in Fountain Valley, California, “Mammography during pregnancy can be safe. However, one needs to balance the benefits and risks,” he tells Romper in an email interview. “Ultrasound is the preferred procedure during pregnancy for evaluating a breast lump, because there is no radiation exposure. Bilateral, whole breast ultrasound can be substituted for mammography as a screening test. The standard mammogram procedure can be adjusted to subjective concerns about radiation in balance with the clinical urgency to perform a mammogram."

However, if you absolutely have to have a mammogram because the ultrasound isn't picking up what it needs to, Reitherman says you can get a mammogram done, but you'll have to wear an iron apron over your abdomen. "There will be no radiation directed toward the fetus. Radiation is not absorbed by the body. It does not spread through the body. It is limited to the tissue radiated — the breast,” he says.

So how exactly does a mammogram work? Can it interfere with the changes your breasts go through during pregnancy with all that squishing going on? According to Reitherman, “A mammogram is an X-ray of the breast. The resulting image can separate normal tissue from abnormal tissue. Radiation is used, but a modern mammogram has less radiation than a chest X-ray." Reitherman also says there's no evidence that getting a mammogram can cause health problems because of the low doses of radiation, and "there's no adverse effect of breast physiology during pregnancy or breastfeeding.”

When should you be getting mammograms, especially if you have a history of breast cancer in your family? There's a calculation involved. Reitherman says, “The standard age for a woman’s first mammogram is 40. A family history of breast or ovarian cancer can potentially lower the age of her first mammogram." There are also apparently several available apps you can use to determine how at risk you are, and the age you need to have your first mammogram, according to Reitherman. "The 10-year risk (the risk of being diagnosed with breast cancer in the next ten years) is the standard metric we use to determine the recommendation for first mammogram. This is then compared to a 40-year-old with average risk,” he says. Further, Reitherman explains that the 10-year risk for an average 40-year-old with no family history of breast or ovarian cancer is 1.7 percent. “This means that the risk of being diagnosed in the next 10 years (40 through 49) is approximately 2 out of 100 or 1 out of 50,” he explains.

If you do feel a lump during your pregnancy, it’s so important to get it checked out immediately. While getting a mammogram can be safe, an ultrasound is even safer. If you do have to get a mammogram done while pregnant, don’t fret — your doctor should be well versed in the precautions you have to take such as wearing a lead apron shield to protect your baby from radiation.