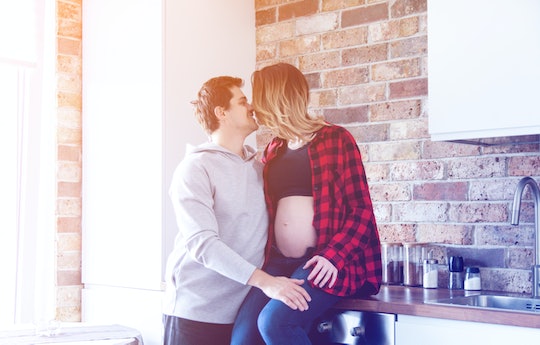 If You're Spotting During Pregnancy, Here's What You Need To Know About Sex

Vaginal bleeding while you’re pregnant is a sight no mom-to-be wants to see. It can make your mind automatically go towards the Worst Case Scenario possible (like a miscarriage or some other problem with your pregnancy). You might wonder what’s causing you to bleed, and if you can have sex if you’re spotting during pregnancy — or if you need to swear off intercourse altogether.

As it turns out, bleeding during pregnancy is a pretty common occurrence. So here are some stats to soothe your mind: vaginal bleeding happens in 15 percent to 25 percent of all pregnancies — and usually during the first trimester, What To Expect reported. Although it can happen at any point during your pregnancy, for the most part it’s usually harmless, even if it is worrisome. “You can have sex if you're spotting during pregnancy, but it depends on what the reason for the spotting is,” Dr. Geoffrey Cly, an OB, reports to Romper. “If you're spotting because your cervix is very sensitive and bleeds when it gets bumped during intercourse, that is not dangerous to the baby.”

Another cause of spotting during early pregnancy can be a subchorionic hemorrhage. If the placenta detaches from where it originally attached itself to the uterus, a small hematoma can occur between the placenta and the uterus, Healthline found. “Recent studies show that this does not increase the risk for a miscarriage if it's a small subchronic hemorrhage, which happen frequently,” says Cly.

That said, placenta previa can cause you to bleed or spot during the midpoint mark of your pregnancy. “The cervix has an opening in the middle, and if the placenta is sitting on top of that opening, then friction could destabilize the arteries and veins in the placenta,” Cly says. “The bleeding that would occur could be very dangerous and extreme.” But since most patients get an ultrasound around the 20-week mark, placenta previa would be detected at that time, and monitored throughout the rest of your pregnancy.

Spotting can show up once again later in pregnancy, as you get closer to your due date. “If you’re spotting and also full term, it could be because your cervix is starting to soften and dilate,” says Cly. “That’s totally normal and it’s OK to have sex because your cervix is ripening.” In fact, your OB might want you and your partner to have intercourse in order to get a leg up on labor. But if you’re not full-term yet (around 37 weeks) and you’re spotting, call your OB to make sure that you’re not having preterm labor. Says Cly: “If spotting is the result of preterm labor, then sex is not OK because that could stimulate your cervix to dilate and cause premature labor."

No matter what stage of pregnancy you’re in, be careful if you find yourself bleeding. Even if you were a tampon-toting gal prior to pregnancy, you should always wear a pad or a pantyliner if you spot or bleed. Not only does it help you keep track of how often you’re bleeding, but you’ll also be more aware of what color the blood is (i.e. brown, red, or pink). And you don’t want to run the risk of introducing bacteria into your vagina and it possibly passing into your cervix.

Naturally, any type of bleeding during any point in your pregnancy might be upsetting and should be communicated to your OB as soon as possible. Most likely, they'll want you to come in and perform an exam to ensure that your pregnancy is progressing normally, and that both you and baby are safe.

More Like This
When Does Pregnancy Horniness Kick In?
How Long Does It Take For Sperm To Induce Labor?
What You Need To Know About Bed Rest & Oral Sex
How To Talk To Your Partner About Wanting A Baby