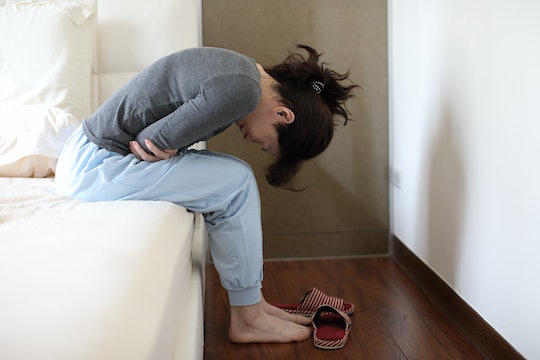 Can You Ovulate Twice In A Month? The Answer Is Confusing

When you’re planning on getting pregnant, you want to know every last detail. Your period takes on an all-new importance, and you might have an abundance of ovulation apps on your phone so you know when the big day is coming. So realizing that perhaps you can ovulate twice in a month can be a total game changer. But unlike most medically-related matters, this one doesn’t really have a definite answer.

Much like you learned in your high school sex ed class, ovulation (which is the release of an egg from your ovaries during your menstrual cycle) is supposed to occur once a month. It lasts just 24 hours, and happens about two weeks before you get your period, Live Science reported. Even though you might ovulate once a month, you could still release more than one egg, which is how fraternal twins are conceived.

But even though ovulation typically is on a 30-day cycle, it doesn’t always occur that way. “It is possible to ovulate perhaps three weeks apart but definitely not any closer,” Dr. Joseph Adashek, M.D., FACOG, a perinatologist, tells Romper. “Even 21 days would be very unusual, although there are some people who ovulate every 25 days.”

So if you do some addition, that would mean, in theory, that if you ovulated on the first day of the month, and then got your period two weeks later, you might have a chance of ovulating again at the very end of the same month — or, more likely, at the beginning of the following month.

And then, along comes a study to complicate things further. A Canadian study published in the journal Fertility and Sterility (and later by the National Institutes of Health) reported that women might not just ovulate one time, but two or even three times a month! Ultrasounds were performed on 63 women, and researchers found that those surveyed “had at least two waves of follicular development,” according to the study’s findings. But before you schedule a scan for yourself, keep in mind that researchers also stated that they couldn’t detect if there was an egg in the follicles or not, which means that the women may (or may not have) ovulated twice in one month’s time.

As Dr. Barry Witt, M.D., a board certified reproductive endocrinologist and OB/GYN tells Romper, this makes sense. "There may be additional waves of follicular growth later on, even after ovulation occurs," Dr. Witt says. "However, typically, the LH surge (which signals ovulation) only occurs once in the menstrual cycle, and the follicles that develop in the second or third waves don't usually ovulate."

If you’re trying to conceive and want to pinpoint how often you ovulate, you can always keep track of it in a few ways. First, your body will let you know that it’s go time when your basal body temperature dips down and then goes back up. Your cervix will also open up a bit, and you’ll have discharge that is thinner, white, and stretchy, What To Expect reported. You can even purchase an ovulation kit and pee on it to see when ovulation is ready to occur.

Like many women, you’ll probably ovulate once a month. Still, you should know exactly how often it occurs, so that you can properly plan for your future, whether that includes an upcoming pregnancy or not.

More Like This
Can You Have Sex With Placenta Previa? Experts Explain
Here's Why You Should Avoid Oral Sex If You Have Placenta Previa
30 Marvelous Baby Boy Names That Start With “M”
How To Tell Your In-Laws You’re Pregnant