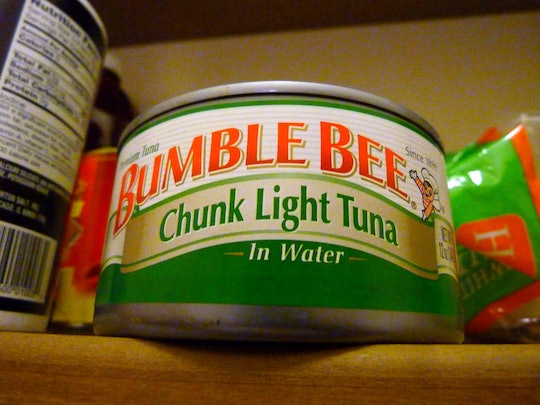 Can You Still Buy Bumble Bee Tuna Now, After The Recall? You Should Be Just Fine

Bumble Bee Foods has recalled 31,579 cases of its canned tuna due to what the company referred to as "process deviations" this week. The recall is voluntary, and was set in motion after concerns of possible health risks arose. So can you still buy Bumble Bee tuna now that much of it has been recalled?

Well, it turns out these "process deviations" took place in the packing facility where the canned tuna is produced. The San Diego-based company has assured the public through a press release that no illnesses have been reported, and that they are essentially employing a preemptive strike to avoid spoilage concerns. "These deviations were part of the commercial sterilization process and could result in contamination by spoilage organisms or pathogens, which could lead to life-threatening illness if consumed," representatives of the company said in a statement, according to Time.

The press release also included UPC numbers for three of different types of canned chunk light tuna that could potentially be affected by the process deviations. They have advised customers to get rid of these products. A list of the UPC codes for products which could have possibly been affected can be found below:

The good news seems to be that, while there was legitimate cause for concern initially, the problem appears to have been fixed. The facility where the tuna was being packaged, which is not owned by Bumble Bee Foods LLC, had a piece of machinery malfunction. The machinery has since been fixed. According to news affiliate FOX6Now, Bumble Bee senior vice president Steve Mavity maintains that the recalls are related to technical services and corporate quality. “Bumble Bee recalled specific codes of canned Chunk Light Tuna produced in Chicken of the Sea’s Georgia production facility, a third-party supplier for Bumble Bee,” Mavity said in a statement.

Bumble Bee Foods is working with the USFDA to remove possibly affected products as quickly as possible. Just remember that the affected tuna are marked with can codes that start with a "T" and pay close attention to "best before" dates, if you're still worried. As long as you're careful, any cans of tuna you might be buying for yourself from this point on should be safe to consume.