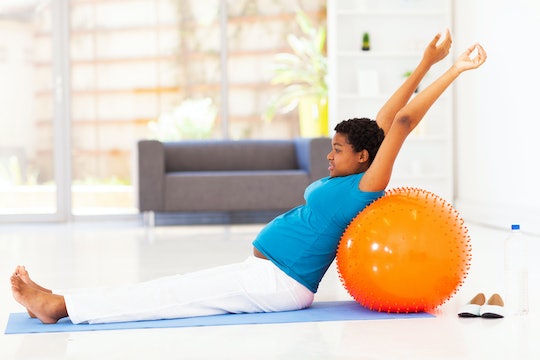 The end of pregnancy often feels like an unending treadmill run with no finish line in sight. There's this place wherein you find yourself utterly terrified to be done with the whole thing, and yet completely willing to do whatever is necessary to bring it about. Women have used myriad methods to bring about childbirth from magic eggplant parmesan to drinking gobs of tea. Is there a more gentle, mechanical method that doesn't involve frying the world's grossest vegetable? What about exercising with pelvic physio ball-based movements? Can you use a birthing ball to induce labor?

While there's no evidence that would suggest that the birthing ball could be used to kickstart labor, it is often touted to be an effective non-pharmacologic method of pain relief, and is even purported to help decrease the incidence of cesarean sections used in labors where such tools are provided, according to an article in Midwifery. So while it might not begin the labor process as you might wish, there's a chance it might improve it in the long run, making it a favorite tool among doulas and midwives across the country. The love of the birthing ball has gone so far that it's available in most labor and delivery departments in hospitals across the country.

I spoke with certified nurse midwife Indira Patel from London to ask her about how a woman might go about bringing on childbirth, and if you can actually use a birthing ball to induce labor. She tells Romper that most of the time, babies just come when they're ready. "Pregnancy is long and hard, but that baby is doing a lot of good work in your uterus, and they'll usually come out on their own schedule." She adds that you shouldn't even think about hastening childbirth until you're at least 38.5 weeks pregnant.

"If you're at week 40 or 41, you're probably near desperate to become a mom after all that time. Unfortunately, there's nothing in any literature to back up the claim that you can use a birthing ball to instigate your labor. We use birthing balls a lot during labor, and they can be very helpful at opening up the hips and bringing the baby down with contractions, but without the assistance of contractions, it's just a comfortable seat for your relaxed pregnant hips." Patel says that there's no harm in sitting on the ball if it's comfortable for you, however, it's not a Pitocin drip.

I sat on a physio ball for almost my entire third trimester in an attempt to appease the demon known as pubic symphysis disorder. My physical therapist had me doing lots of rocking exercises on the ball to bring about much needed pain relief from the laxness of my pubic bone and hips. It worked to a point, but it did not hasten my labor, much as I probably wish it did. I also sat on the ball while I was in labor with my son when I chose to go the non-medicated route. (Never again.)

Patel says that the only method that's natural and safe that's also been proven to induce childbirth in some of the population is nipple stimulation. It triggers the release of the hormone oxytocin, which is what the drug Pitocin is designed to mimic. The oxytocin spurs on contractions and labor just as it would be if it came on naturally. However, it's a long and involved process, and you have to be willing to get really up close and personal with your nipples, and settle in for a long meet with them.

Childbirth may seem like lightyears away when you have insomnia, reflux, your ankles are swollen, and you can't see your feet, but in reality, it's coming quicker than you thought it ever would, even if your doctor has to make it happen for you. Patience is a virtue most pregnant women do not possess, but it's a valuable one nonetheless. But hey, you can always try the eggplant. (You can even have my serving.)