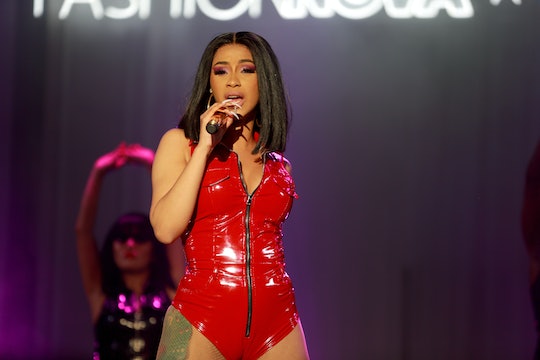 Cardi B's daughter, Kulture, has a love of music running through her blood. With the musician for a mom and rapper, Offset, for a dad, it's pretty much guaranteed that she will have some kind of interest in music for her whole life. And, at 6 months old, she's already loving music — but her taste in music might be a little surprising to some. Yes, Cardi B's daughter loves "Baby Shark" proving that no one is immune from the obsession — not even Cardi B and her daughter.

Cardi B is very, very protective over her daughter, according to Us Weekly. It took her months to share a photo of Kulture on social media and she rarely gives some insight into her daughter's personality. So, any update about Kulture is a good update — and Cardi B finally gave fans the juicy details that they wanted to hear.

On Friday, Cardi B took to Twitter, where she shared that her 6-month-old daughter is obsessed with music. And of course, Kulture just so happens to be obsessed with her mom and her dad's music.

"Songs Kulture likes," Cardi B tweeted. And the list is as follows: "Taki Taki" by DJ Snake featuring Selena Gomez, Ozuna, and Cardi B (of course); "I Like It" by Cardi B (again), Bad Bunny, and J Balvin; "Ric Flair Drip" by 21 Savage, Offset (why not), and Metro Boomin'; and "Mi Gente" by J. Balvin and Willy William.

While these might seem like rather unconventional songs for a 6-month-old to enjoy, people shouldn't worry because Kulture is just as obsessed with one song that no one can get out of their heads — "Baby Shark".

For parents that have been living under a rock, "Baby Shark" has more than 2 million hits on YouTube, and is absolutely infectious. Kids can't get enough of it and parents can't get it out of their heads. There's a perfectly logical explanation behind why Kulture can't get enough of the song. The repetition in the song and the simple melody is easy to sing and memorize, which is why kids love it and why it never can seem to leave parents heads throughout the day, according to the Daily Beast.

The song also releases as a pleasurable feeling among hearing it, according to the Daily Beast, which means that smile on your kids face is so genuine. Not to mention, kids love the family imagery — they can easily identify a "mommy" "daddy" and "baby" — even if they're all sharks.

This isn't the first time that Cardi B has tweeted about "Baby Shark" — it's been one of Kulture's favorite songs since September when Cardi B first tweeted out the lyrics.

Kulture must be really obsessed with music. On Friday, Cardi B also tweeted that Kulture even watches her dad's music videos. That's so adorable. But some people might have a problem with Kulture's affinity for rap, especially since the lyrics aren't necessarily filled with baby and mommy sharks.

But, it's very likely that Kulture doesn't understand what her mom is rapping about in these songs. Young infants prefer certain types of instruments and vocalizations, according to National Geographic, so it's likely that Kulture just likes the way her mom sounds on the song (just like all of Cardi B's many fans).

And if anyone thought that Kulture is a little too cultured with her love of rap, rest assured the little girl has the same music taste as every other kid out there.