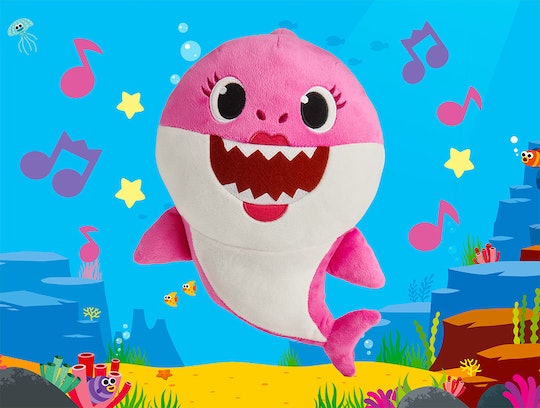 Where Did Baby Shark Come From, Anyway? Because You're Honestly Really Curious

If you're a parent, chances are you've heard of the song "Baby Shark," about a shark family — doo doo doo doo doo — who swim around the ocean, hunt and run away. There's a whole viral video and dance that go along with the song, and with over 2 billion hits on YouTube, it's almost impossible not to have heard it. So, where did "Baby Shark" come from anyway? Who started this craze and how did it end up taking over your life?

A few weeks ago, my son and I went to visit my best friend up in New Hampshire. She has three kids and her two youngest are 2-year-old twins. On the second day of our visit, we packed up the kids in her truck to go to her older son's football game. We had the three little ones in the back — her two toddlers and my 5-year-old — and eventually we began to hear the twins getting antsy. Luckily, my friend knew just the question to ask: "Do you guys want to listen to 'Baby Shark'?" An enthusiastic response from the backseat determined the answer was in the affirmative. My friend turned to me. "Do you know 'Baby Shark'?" she asked, as if the song were some magical trove of mom-magic. "No," I said. My friend's jaw dropped. "What?! You don't know 'Baby Shark'?" I felt immediate shame (had I somehow failed as a parent?) as she began to play the song. But for the next few days — heck, maybe even the next week — the tune was stuck in my head, so I immediately understood why it caught on like wildfire. Baby Shark doo doo doo doo doo/Baby Shark doo doo doo doo doo. I still had no idea where in the world it came from, however.

I did the research and it wasn't long before I came across an article on the BBC media channel News Round explaining that the song "Baby Shark" was produced by a South Korean entertainment company called Pinkfong. If you've think you've never heard of Pinkfong, you're probably wrong; according to the company's Wikipedia page, Pinkfong has developed over "2,200 children's videos, songs, games and apps." Which means, if you love "Baby Shark," you'll likely enjoy their other videos and apps for your kids as well. While the craze began in South Korea, Pinkfong attributes their viral success to popular Korean bands like Red Velvet, Girls' Generation and Black Pink (who would perform their songs at concerts, as the BBC explained).

The Pinkfong channel on YouTube has over 13 million subscribers and features tons of educational content for kids on its feed. Their songs are so catchy and their videos so brightly colored and interactive, it's no wonder these videos have billions of views — kids and parents are playing them on repeat.

On the way home with the kids that night, my friend put on another version of "Baby Shark." The tone of this song was more mellow, and almost put my 33-year-old self to sleep in the passengers seat next to her. It's called — can you guess? — "Good Night Baby Shark." And, yes, it's the same song except it's sung slower and some of the lyrics are changed to make it the perfect bedtime lullaby for little ones. "Good Night Baby Shark" has over 4 million views on YouTube, which is still considered a viral hit by most standards. If you're looking to put your baby shark (or sharks) to bed, definitely check out the lullaby version.

Needless to say, the "Baby Shark" craze is here to stay and with entertainment companies like Pinkfong around to produce catchy songs and fun videos, there is sure to be another hit coming our way. It's great for our kids... but maybe not so great for our mom brains. Keep swimming, mommy shark.

More Like This
If Your Kids Love Their Elf, You Don't *Have* To Put Him Away On Christmas
30 Great Non-Toy Gift Ideas For Kids
Festive Mommy & Me Holiday Nail Ideas To Try
Spread Some Christmas Cheer In Your Child’s Bedroom