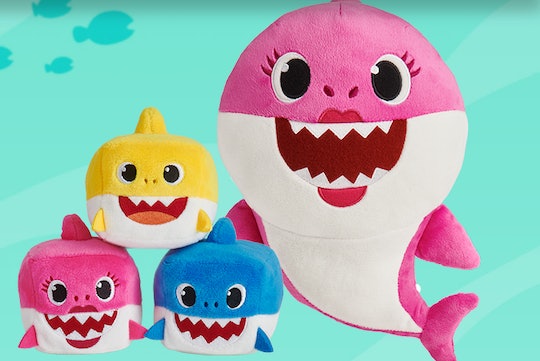 Are you tired of your kid singing "Baby Shark" by Pinkfong yet? Were you hoping that the phenomenon would have long gone the way of other fads and died a graceful death? Well, guess what? You're certainly not alone and you're certainly not off the hook just yet. In fact, it looks like your kid's obsession with "Baby Shark" could be about to get markedly more intense. Because that very same baby shark your kid can't stop singing about is now a toy. You know, so they'll have something tangible to hold on to while acting out the mesmerizing dance sequence. Do-do-do-do-do-do.

Toy company WowWee, who first brought you the other toy fad of 2017, Fingerlings, is launching a line of "Baby Shark" plush toys just in time for all of your holiday shopping, as Good Housekeeping reported. Now, in case you're that one person on the planet who has never heard of "Baby Shark," it's a massively popular YouTube video created by Pinkfong, a company that creates educational songs and animated videos for children around the world. Their song and dance video for "Baby Shark" has been viewed more than 2 billion times, and it's probably one of the most difficult ear worms to try and forget in recent memory.

And now there's a toy to go along with the ear worm too. Also... did I mention the plush toy will sing?

WowWee has created a line of "Baby Shark" plush characters based on the family of sharks in the song: Mommy Shark, Daddy Shark, and Baby Shark. The toys sing along with the song when you squeeze them. (No word yet on how hard you have to squeeze them to make them stop, unfortunately.) The plush characters will sell for $17 a pop, and are available for pre-order on Amazon.com as of Saturday, December 1. Amazon is expected to ship these around Dec. 15, so you can add a little last minute Christmas stress along with the knowledge that you're going to be hearing this song on repeat throughout the holidays.

These singing plush toys aren't the only "Baby Shark" options, by the way. Parents of kids who are dying to listen to this song on a minute-to-minute basis will also be able to order cute little stackable singing cubes at $8 per item. They're smaller and they stack, which will probably make them feel more collectible and therefore slightly more exciting to your little one.

Here's a bright spot to consider: If your little one has a "Baby Shark" plush toy at their disposal, at least they won't be getting into fights with Alexa like this hilarious little girl.

I'm about to give everyone some obnoxious old mom advice, so brace yourselves. It might not seem like it, but there will come a time when you will miss complaining about "Baby Shark." When you'll picture your kid doing that lame dance and maybe well up with a few tears, wishing they were little enough to be that enthusiastic about anything again.