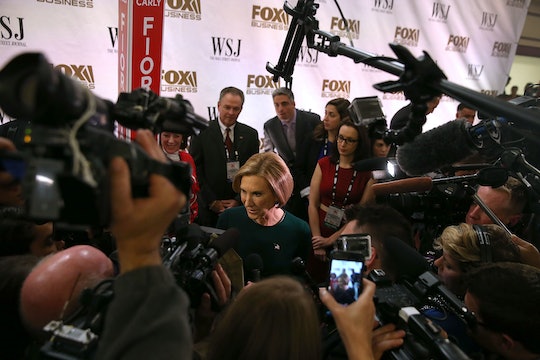 Carly Fiorina Actually Talked About Families During The GOP Debate, & It Should Be A Huge Wake Up Call For Republicans

After the first three Republican debates fell short of the expectations of many, the fourth Republican primary debate, hosted by the FOX Business Network, promised the substantial coverage we've been waiting for — and it delivered in spades. The debate, broadcast live from the Milwaukee Theatre in Milwaukee, Wisconsin, focused heavily on the economy with an emphasis on jobs and taxes. Other candidates might've focused on Obama and Putin and Hillary, but it was Carly Fiorina who actually talked about families.

The moderators dove directly into the hard-hitting issues about the economy, making good on their promise to ask the real questions after floating an attack ad against the circus-style debate hosted by CNBC. The ad promised that FOX was going to do things differently during this debate, and they did. The media frenzy surrounding Ben Carson stayed off the table. Donald Trump's Saturday Night Live performance was never mentioned (but like, I wish it did, because we should talk about Trump's "Hotline Bling" parody). The debate stuck to real issues, and in doing so, it was a breath of fresh air.

Since this debate focused heavily on economic policy, the smoke and mirrors we've grown so accustomed to in previous debates did not fly. Trump fell on his face each time he was called upon, showing his lack of knowledge at every turn. The Republican's other front runner, Ben Carson, was soft-spoken and unprepared to go into detail regarding policy. Their combined failures allowed other candidates to rise to the forefront.

When it came to economic policy and family, Fiorina shone far brighter than the rest. She showed up with an impressive performance at the debate, keeping her composure under pressure and answering questions with the American family — not American businesses and big government — in mind.

In her opening, when she was asked about balancing the national budget, she hat-tipped parents everywhere who were watching with a story about a friend who feared for her children's future because of America's economic instability. She then dove into her detailed plan for economic recovery and growth, starting with a zero-based budget, a model many mothers are well-acquainted with from personal experience. While the other candidates stumbled to find their tempo and flow, Carly looked poised and confident. She discussed her plans for real tax reform, regulation review, and how she plans to hold government officials accountable for their actions. Her focus remained consistent with reigning in government and stripping out the corruption. Throughout it all, she kept families at the forefront of every argument.

When asked about alleviating pressure on small business, Fiorina returned to familial issues, providing a firm stance on repealing Obamacare in favor of state-run, high-risk pools and free market healthcare that would allow families more transparency when choosing coverage. All of her answers were filled with substance and the actual steps she would take as Commander-in-Chief.

Fiorina is proving to be untouchable when it comes to certain issues, at least as far as her party is concerned. She says the things women in the Republican party have long waited to hear. She doesn't cower in the face of a Trump-loving audience. She doesn't back away from a Rand Paul attack. There is no line of question intimidating enough to deter her. She does Blue Steel better than Zoolander, for crying out loud! Nothing ruffles her. And tonight, Carly played her cards like a seasoned veteran, schooling Trump and Carson when it came to policies, and embarrassing the rest of the playing field on family issues, concerns, and the future of the American middle class.

Ted Cruz used two separate examples of single working mothers to appeal to families, but otherwise, most of the other candidates stated mum on the concrete issues men and women raising children in America face. Cruz's comments felt incredibly forced, like he checked the box on the list of Things I Should Say When They Ask Me A Question and then moved on. Carly Fiorina was the only candidate who drove home the issues for women and their partners. You don't have to agree with her politics, her plans, or her policies, but there's no doubting the ease reiterating the concerns of many families in front of a huge national audience.

Her impassioned closing statements awarded us a glimpse into the type of leader Fiorina has positioned herself as so far in this election cycle. When she promises a future that doesn't swallow the middle class up, it's impossible not to want to believe in that, especially when so few candidates are actually making it a point to level with the men and women who's votes their relying on.

Imagine, a Clinton presidency. Our military will continue to deteriorate, our veterans will not be cared for, and no, Mrs. Clinton, that situation is not exaggerated. The rich will get richer, the poor will get poorer. The middle class will continue to get crushed. And as bad as that picture is, what's even worse is that a Clinton presidency will corrode the character of this nation.

For many, you want to root for her because she's a woman who's been there, who's raised children, who's known sacrifice. In a essay on Cosmopolitan.com, Robin Marty wrote:

For months I've been championing Fiorina's right to be on the stage with all the other Republican candidates, chastising Fox News for refusing to let her into the main event during the first GOP debate. While her polling was still dismal, I felt it was a basic call to fairness and diversity to have a candidate with a completely different background participating, ready to bring her own uniquely female perspective.

As a mother, I understand what it's like to look at Fiorina and see hope, especially in a party that's made a business out of making sure women inch along but only as fast as they'll let them, and only in the areas they'll allow them.

As much as our politics may personally differ, there was something satisfying about seeing the lone woman in a field full of men float so effortlessly between rounds of questioning. There was something so satisfying about seeing her stay on her game without succumbing to the childish antics of some of her other party members. She didn't complain about the time she got to talk. Instead, she used it wisely, and she used it powerfully. She spoke to mothers and fathers, and she told them the things they wanted to hear, however right or wrong they might turn out to be in the days to come.

Throughout the night, Fiorina was a poised and confident candidate, who proved herself to be a serious contender to go up against Hillary Clinton as the Republican nominee. But within her own party, one thing is incredibly clear: To win parents, the GOP needs to find out how to beat Carly.