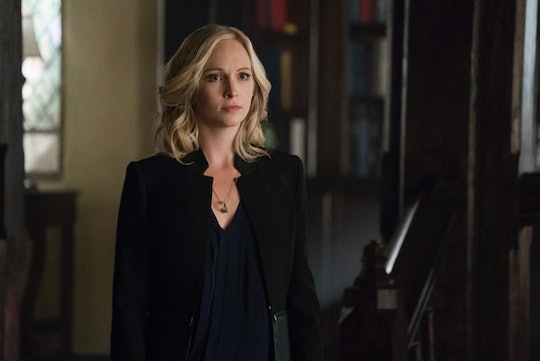 Alaric & Caroline Return To 'The Originals' One Last Time

When The Vampire Diaries ended after eight seasons, The Originals lived on, and it was bittersweet. Kind of like when Buffy the Vampire Slayer ended, but the characters in the universe still sort of existed because its spin-off, Angel, was still on the air. Having an arrangement like this means that from time to time, characters can pop up even if the original series has ended, like what’s going to happen when Caroline and Alaric return to The Originals for one last hurrah and complete fan service before the series ends for good.

I refuse to believe that I’m the only one who instantly thinks about the ramifications of having Caroline and Klaus alone together after shipping them hard on and off throughout the years. Of course since this is after the events of The Vampire Diaries, it means that Stefan is dead and Caroline may or may not still be mourning him.

But you can't have Klaus and Caroline in the same room without sparks flying — that’s just a given at this point — so it could mean something big for these beloved characters from the The Vampire Diaries universe.

Obviously this means that fans are already going absolutely gaga over Caroline and Alaric showing up on The Originals years after their own show ended. It makes you wonder what this means for Klaus and Caroline (affectionately known as Klaroline), and also how Alaric is going to react to having Klaus back in Mystic Falls. In the season finale of The Vampire Diaries, Alaric opened a school for magical children in the Salvatore mansion, a school that both his daughters and Klaus' daughter Hope attend. So really, it was only a matter of time before Klaus and Alaric would be forced to see each other face-to-face.

Understandably, fans on Twitter are all about this three-way reunion and really, just being able to see Caroline and Alaric again is a treat in itself. But what this means for Hope and for Klaus and Caroline’s would-be relationship remains to be seen.

This big cameo is also a great opportunity to introduce the Vampire Diaries and Originals spin-off, Legacies, which premieres in October 2018. The spin-off will be about the Salvatore Boarding School and center on training a generation of teen mystical beings. The students at the school are all witches, vampires, werewolves, and more who probably need some serious controlling — we all remember the early seasons of The Vampire Diaries. Since both Hope and Alaric are supposed to be central characters for the spin-off, chances are this cameo in the penultimate episode of The Originals Season 5 is going to help set that up.

In a way, though, seeing Caroline and Alaric on The Originals makes it even harder to say goodbye to the show. Sure, Alaric will be in the upcoming spin-off and maybe we’ll get lucky and see Caroline from time to time, but there’s so much that could have been done with her on The Originals with literally everyone else that it’s a little sad.

With The Originals about to end for good, it's like the end of an era, even if the spin-off will start something brand new. Still, it's going to be hard to say goodbye to our beloved characters and even harder to say goodbye to fan-favorite Caroline once again. I’m not sure what this means for the fate of all of our favorite supernatural beings, but if it ends in the same way that The Vampire Diaries did, then there are sure to be plenty of tears, happy and sad, all around. Let’s just hope that Caroline and Klaus can give fans the closure or hope they definitely need.