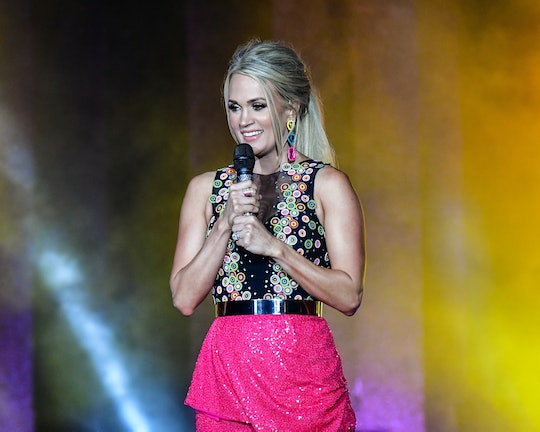 Carrie Underwood's Baby Boy's Reaction To Her Voice Is Perfect

Country superstar (and American Idol winner) Carrie Underwood has a beautiful voice. This is something that a lot of people know to be true, including Underwood's two sons with husband Mike Fisher — Isaiah, 4, and Jacob, 5 months — who get to hear her voice in their homes all of the time. In spite of this, Carrie Underwood's infant son's reaction to her singing is so priceless. He really does love his mom's voice and it shows.

Underwood impressed audiences with her voice when she competed on American Idol in 2005. And almost 15 years later, she is still winning over new fans, like her infant son, Jacob. In a hilarious Instagram post from over the weekend, Underwood proved just how much her little boy loves his mama's voice (and how he prefers one parent over the other).

In the video, Fisher can be seen standing over Jacob, who is lying down. But the second that he starts to sing, Jacob gets very fussy and begins to cry. The only thing that renders him speechless and stops his crying is when Underwood jumps in to finish the song. They continue this for a while and every time that Fisher sings, the little boy whines.

Sorry, but some things are better if mom handles them. This is clearly one of those things.

OK, so Underwood does have the upper hand in this singing battle. Fisher is a retired hockey player who has spent more time touring the nation while playing on an ice rink. Unlike his wife, he doesn't have to sing to thousands of people on a massive stage each night. So, it makes sense that Jacob would be so in love with her voice — because millions of people are in love with her voice. But at the same time, this video is also super funny. It's hard to not fall in love with Jacob's reactions to the differences in his parents singing. And clearly, Underwood's Instagram commenters are huge fans of his reaction, too.

"This is the greatest thing I've seen all year," Justin Timberlake wrote in the comments of the photo.

"This is what the internet was made for," another commenter added.

"I have watched this so many times," another commenter wrote.

But Fisher has a perfectly good explanation for Jacob's visceral reaction to his voice. "The real reason is he was hungry and wanted your food," he explained.

If that helps Fisher come to terms with the fact that he lost the sing off, then sure. That is a perfect explanation behind his reaction.

It should be pretty obvious to everyone by now that Underwood's sons are quite possibly the biggest fans of their mom. They've grown up listening to her singing to them (as per TODAY) and watching her perform to huge audiences — and will continue to do so for the rest of her career. Underwood has even taken videos of Isaiah singing, according to Taste Of Country, proving he has some talent himself. It's adorable to know that they're so taken by their mom, just as much as her fans are.

But that isn't to say that being a huge musician and having two young sons is easy for the super mom. In May, Underwood told TODAY that she "stopped trying to be perfect" after giving birth to Jacob. This meant that Underwood began embracing the fact that their life is anything but normal and that her sons will be growing up on the road. "It's so interesting to me to think about Isaiah and how they're going to be like, 'Well this is normal right? Everybody's mommy and daddy do this right?'," she told People in June. "We're trying to figure out how to keep them as normal as possible as well."

It's hard to be normal when your mom has the voice of an angel — and clearly both of her boys are figuring that out.