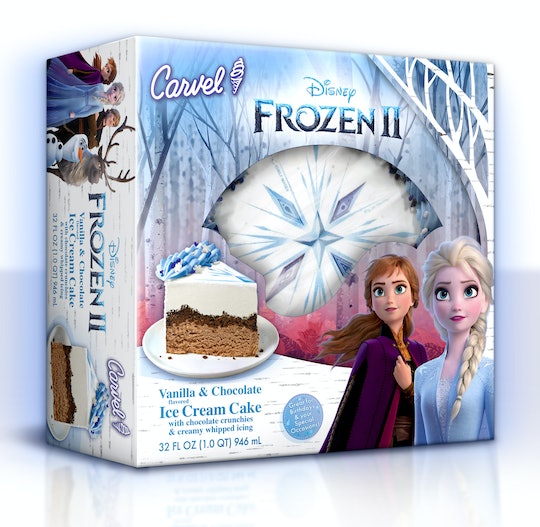 It's not much longer until the world finally gets another Anna and Elsa adventure when Disney's Frozen 2 is released to theaters. To celebrate the occasion, Carvel has created a Frozen 2 ice cream cake that's available for purchase at most major grocery stores. What better way to honor the return of the Ice Queen (and the rest of the gang) than with a frosty treat?

Carvel partnered with Disney and Rich Products/I Love Ice Cream Cakes to create the special edition dessert. Your kids (and you) will love the snowflake design, as well as the perfect ratio of vanilla to chocolate ice cream layers, whipped icing, and the chocolate crunchies Carvel is known and loved for. If you plan to share (no one will blame you if not), there is enough cake to serve six to eight people.

Kimberly O'Brien, Shopper Marketing Manager for Rich Products' In-Store Bakery & Deli Division, said the company is "incredibly excited" to partner with Disney and Carvel on this Frozen 2 project. She also said that everyone who contributed to the creation of this delicious ice cream cake wanted to deliver "a really special treat that captures the spirit of the film."

Carvel has been creating frozen desserts for 85 years as the United States' first retail ice cream franchise. They are the company behind numerous classic cakes, so it's no wonder they were involved in making the first official Disney Frozen 2 ice cream cake.

The special edition treat is available at stores across the country and retails for $15. So, if you suddenly have a craving for some ice cream cake you can find a store that carries the Frozen 2 dessert using Rich's product locator tool.

Don't forget (as if your child would allow such a thing), Frozen 2 is out in theaters on Nov. 22 and if the trailer says anything, it's that this new adventure is going to be epic.