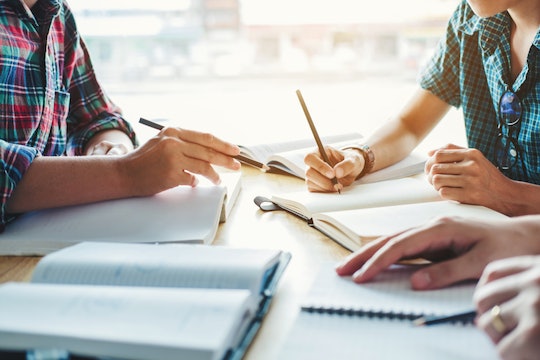 Every two years, the Centers for Disease Control and Prevention publishes its Youth Risk Behavior Surveillance (YRBS) report, which looks at health behaviors and experiences among American high school students. For the first time ever in 2017 though, the CDC also included a pilot question about gender identity, and it was long overdue. In a report released Thursday, the CDC found 2 percent of high school students identify as transgender, and while the study is far from being a comprehensive look at transgender youth, it does at least provide some very much-need information on what experts already know is an extremely vulnerable and underserved population.

According to the CDC, 131,901 students from 10 states and nine large urban school districts participated in the anonymous and voluntary survey that asked them to self-identify as either cisgender or transgender, according to the CDC, though participants were also able to indicate that they weren't yet sure how they identified, or that they didn't understand what the question was asking.

Although the survey may not at first seem entirely groundbreaking, it's actually incredibly important that the CDC is beginning to collect data on the transgender youth population, and the risks and challenges they face. For one, the findings help make transgender teens more visible — when we know, for example, that nearly 2 percent of teens surveyed explicitly identifies as trans, then it's concrete evidence that they exist, and that they have needs to be addressed, particularly when it comes to government policy. And though the scope of the survey may still be incredibly limited, the fact that the question was asked at all is an important first step.

The takeaway? The CDC has advised that schools need to focus on fostering "a safe and supportive school environment by creating and enforcing anti-bullying policies, and identifying and training supportive staff members," according to NBC News.

But LGBTQ advocates have also emphasized that these figures are really only the beginning: for one, the number of students asked the question was still relatively small, and participation was optional. In fact, the CDC itself acknowledged that the data is inherently limited given that "students with the highest risk for these outcomes might have dropped out."

In a statement in response to the CDC's report, The Trevor Project's Amit Paley called the data "game-changing, but still incomplete," and said:

The Trevor Project will continue to educate and encourage decision-makers across the country to adopt the gender identity and expression questions in the next round of YRBS surveys. Only by understanding who our youth are and how they identify can we craft policies to allow every young person to thrive.

LGBTQ advocates have become increasingly vocal in recent years about the very real — and very infuriating — risks that transgender people face simply for being trans, and you only have to look at ongoing debates over gender neutral bathrooms or respecting preferred pronouns to see that there is still so much work to do before the trans community is allowed to exist without being judged or targeted.

At the very least though, the CDC's latest report helps to begin to quantify the struggle transgender teens face, and hopefully it can help be the beginning of greater discussion about how to better support transgender kids, and reduce their suffering.