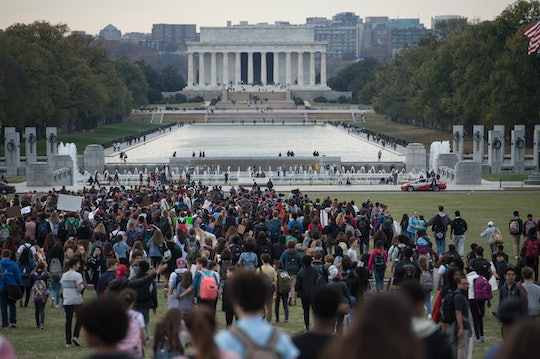 Join These Celebs At The Women's March

If there was any upside at all to the divisive 2016 election season, it might be that women (along with their male allies) came together to stand up for their rights. No matter what party you affiliate with, that has to be a good thing, right? Almost as soon as the election results were finalized in the early hours of Nov. 9, women on social media were already working away to organize a protest march for inauguration weekend. Now, just a few weeks out, there are an estimated 200,000 women and men, including many celebrities, attending the Women's March on Washington on Jan. 21. The president-elect will be sworn into office the preceding morning.

Given all of the attention surrounding the event, many groups and foundations — ranging from NARAL Pro-Choice America to the Trayvon Martin Foundation — quickly teamed up with organizers. They also partnered with the "Artists Table," meant to gather celebrities and, well, artists who wanted to lend their privilege to the march. According to Fader, the list of celebs so far includes:

None of the names should be all that surprising — many were ardent Hillary Clinton supporters (or just really outspoken about their distaste for President-elect Donald Trump) during the election cycle.

That list will probably get a lot longer as the day of the event nears.

America Ferrera is the chair of the Artist's Table and told Entertainment Weekly:

Since the election, so many fear that their voices will go unheard. As artists, women, and most importantly dedicated Americans, it is critical that we stand together in solidarity for the protection, dignity, and rights of our communities. Immigrant rights, worker rights, reproductive rights, LGBTQIA rights, racial justice and environmental rights are not special interests, they affect us all and should be every American’s concern.

Most of the celebs seem to be joining the march in Washington, but others will attend the many sister marches happening in cities all over the country that day. Chelsea Handler, for example, will be hosting a march in Park City, Utah, coinciding with the Sundance Film Festival.

Handler said in a statement, "Sundance has always been a platform for change: not only for filmmakers and filmmaking, but also for big ideas for the future." The Netflix talk show host added, “If there's anything I learned in the last year, it's that we need to be louder and stronger than ever about what we believe in, so I joined some incredible women from around the country to bring our voices together in the streets of Park City."

Other celebs have taken to social media to announce their participation in the event. "Nice try, Donald Trump," actress Olivia Wilde tweeted in early December. "Get ready to arrest a couple hundred thousand of us."

There are many different reasons to want to join the marches — it's not just that everyone is protesting Donald Trump (although that certainly is part of it for some protestors). Celebs like Debra Messing and Scarlet Johansson each made statements declaring that they are concerned about women's healthcare and the fate of Planned Parenthood under a Trump administration.

For others, it's a way to demonstrate that some of the proposed policies and rhetoric from Trump himself, and members of his probable Cabinet, aren't in line with women's values — whether it's discriminating against certain races and religions or being anti-LGBTQ.

Other public figures, like Gloria Steinem, are also expected to be at the event's kickoff at Independence Avenue and Third Street SW on Saturday morning. With celeb attendees or not, the Women's March on Washington was already bound to be newsworthy. But the female stars (and male allies) who plan on showing up do give the event that little extra something — it's not something you'll want to miss, whether you head out in person or follow along on social media.