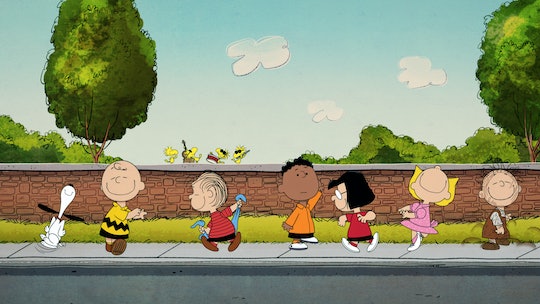 Siri, play “Linus and Lucy.” Your favorite Charlie Brown holiday specials and a bunch of new, original Peanuts specials are heading to Apple TV+. First up? The classic Halloween special, It’s the Great Pumpkin, Charlie Brown, which is already available to stream on the platform. But if you don’t have an Apple TV+ subscription, you can still stream it for free starting on Oct. 30 until Nov. 1.

Next month, A Charlie Brown Thanksgiving will be available on Apple TV+ on Nov. 18 and will stream free for non-subscribers from Nov. 25 to 27. Then to wrap up the holiday season, A Charlie Brown Christmas will start streaming on Dec. 4 and will be available to watch for free from Dec. 11 to 13. The Peanuts’ new home is a collaborative effort between Apple TV+, Peanuts Worldwide, Lee Mendelson Film Production, and WildBrain, Apple announced in a press release on Monday.

Before this new deal, Charlie Brown fans could catch the Peanut specials on primetime networks such as ABC and CBS. In 2019, for example, ABC aired It’s the Great Pumpkin, Charlie Brown twice before Halloween, according to TV Guide. Currently, there are no TV listings scheduled for any of the holiday specials.

Also coming to Apple TV+ are new seasons of the Snoopy in Space, which will include specials on Back to School, New Year’s Eve, Earth Day and Mother’s Day. Additionally, Peanuts in Space: Secrets of Apollo 10 and The Snoopy Show, a documentary commemorating the comic’s 70th anniversary, will air in February 2021.

In addition to no scheduled listings on ABC this year, Peanuts specials that previously aired on Hulu and Amazon Video have also been removed, throwing some fans for a loop on how they'll to continue their holiday family tradition. Nonetheless, watching Charlie Brown and the Peanuts gang is a holiday keepsake for many. So whether you choose to take the Apple TV+ route or watch it on DVD, you can still get a lots of Woodstock love this holiday season.